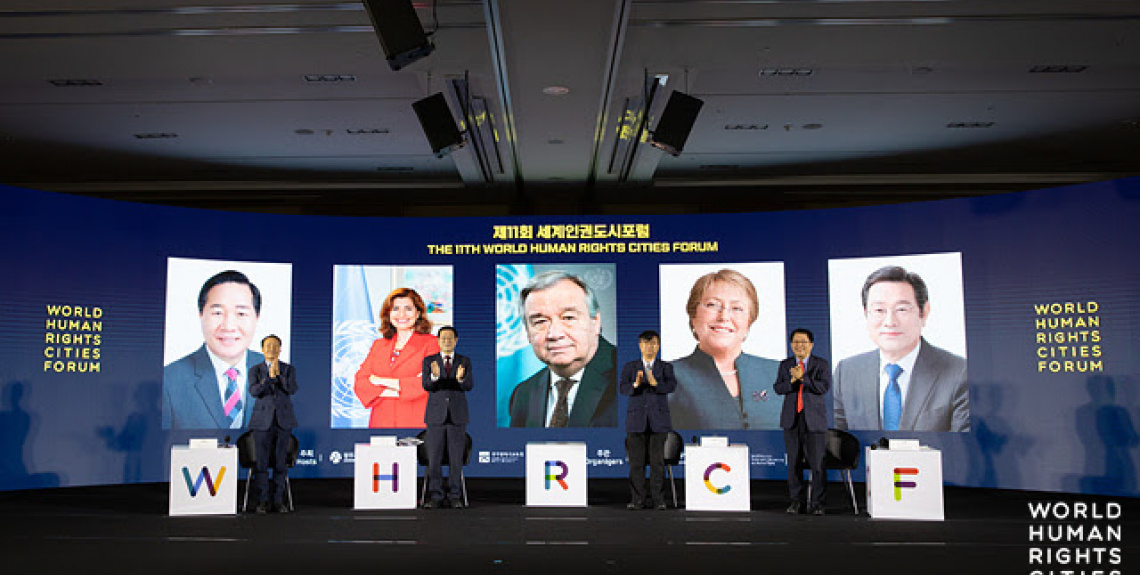 The annual meeting point for the human rights cities movement was held from 6 to 10 October 2021. In its 11th edition, the Gwangju Forum focused on addressing the current health and social crisis based on human rights values, towards building a new social contract making sure recovery efforts leave no one behind.

Through the participation of many UCLG and CSIPDHR member-local and regional governments, as well as representatives of the UN, international partners and human rights defenders, it provided significant contributions to the UCLG process of definition of a new Pact for the Future and to “Our Common Agenda” proposed by the UN Secretary General.

[ Know more about our « Local Governments and Human Rights » agenda ]

The UCLG-CSIPDHR organized the following three sessions during the WHRCF 2021 :

« Plenary Session One: High-level dialogue on the future of the global human rights cities movement »

The Forum’s Plenary Session One organized by UCLG-CSIPDHR, OHCHR and GIC brought together local governments with representatives of the OHCHR and UCLG leadership to continue building synergies around the “Local Governments and Human Rights” agenda. This process is based on highlighting the leadership and policy commitment of local and regional authorities, while exploring concrete and meaningful pathways of cooperation with the UN Human Rights.

It is the third meeting of this kind, building on the successful holding of similar events in 2019 and 2020.

The session focused particularly on the role of LRGs in driving responses to the COVID-19 crisis as well as contributing to recovery efforts, making sure no one is left behind in this process. Local authorities equally addressed collective initiatives at regional and international levels, held particularly in the context of the WHRCF, the UCLG-CSIPDHR human rights roadmap and the forthcoming partnership agreement between the UCLG and the OHCHR.

Emilia Sáiz (UCLG Secretary General) and Nada al-Nashif (OHCHR Deputy High Commissioner) gave her opening remarks to the event, celebrating the partnership process between both organizations on human rights. Taheo Lee, South Korea Ambassador to the UN Geneva, highlighted his country’s commitment to continue supporting the UN “Local government and human rights” agenda, showing how cooperation and partnership are truly at the heart of this agenda.

The UCLG ASPAC Secretary General Bernadia Tjandradewi moderated a first panel discussion with mayors and leading figures in the local governments of Jeonju (South Korea), Rivas Vaciamadrid (Spain), Sfax (Tunisia), Subang Jaya (Malaysia) and Utrecht (The Netherlands). Local governments’ highlighted their contribution in making sure no one was being left behind through the crisis, particularly thanks to policy innovation, political leadership and partnership.

The UCLG-CSIPDHR Co-President, Linda Voortman, introduced participants to the UCLG human rights roadmap and Pact for the Future process while presenting daring views on how to renew the social contract after human rights values.

This special event was organized by the UCLG-CSIPDHR and the UCLG ASPAC regional section to bring Asia Pacific perspectives to the follow-up process to the Global Charter-Agenda for Human Rights in the City. Accordingly, it gathered local governments and urban stakeholders in the Asia Pacific region to collectively reflect on local challenges, innovations and priorities on human rights at the local level key for the regional agenda.

The Mayor of Gwangju Lee Yong-sup, and the co-mayor of Utrecht, Linda Voortman, both UCLG-CSIPDHR co-presidents, shared their commitments to promote the Charter-Agenda process within UCLG. They invited participants to reflect on common priorities that could help articulate human rights cities dialogue from Asia to the rest of the world.

The coordinator of the CSIPDHR, Amanda Flety, highlighted how this process was a key part of the wider UCLG human rights roadmap seeking to support the human rights cities movement through political debates, campaigning and learning. The Secretary General of UCLG-ASPAC, Bernadia Tjandradewi, noted how human rights played a key role in making sure COVID-19 recovery efforts led to sustained prosperity while leaving no one behind.

Local representatives from these cities placed emphasis on key themes such as climate emergency, historical memory or the promotion of tolerance. They also highlighted the importance of mainstreaming the rights-based approach in local action while fostering solid working relations with local actors working on human rights and national authorities.

Four representatives of different organizations working on human rights at the local level took the floor in the meeting’s second panel, including the OHCHR Asia Pacific branch, the Office of Indonesia’s President, World Enabled and Kota Kita / Global Platform for the Right to the City. The session was moderated by Windi Arini from Raoul Wallenberg Institute.

They provided a meaningful multi-stakeholder overview of human rights priorities and innovations at the local level in the Asia Pacific region. Again, they emphasized the importance of cooperation between local actors, while introducing synergetic approaches to the human rights city: for instance, universal design or the right to the city.

« Special Session: Guaranteeing the right to the city for all - Local governments addressing violence against women »

For the first time ever, the World Human Rights Cities Forum addressed the issue of violence against women and girls (VAWG) in connection to the #Cities4Rights agenda. This event brought together local government leaders committed to address VAWG through local policymaking and international cooperation.

This special event was also the first in the international agenda proposed by the Seine Saint Denis FICOL project: An ambitious initiative led by this CSIPDHR co-president aimed at strengthening cooperation between local authorities on VAWG around the idea of a shared observatory. This project is supported by the French Cooperation Agency (AFD).

The president of Seine Saint Denis, Stéphane Troussel, and the United Nations Special Rapporteur on VAWG, Reem Alsalem, all sent meaningful contributions to the event, highlighting the important role of local engagement and political leadership towards addressing structural violence and supporting the work of actors on the ground.

Four inspiring women leading their respective cities’ quest against violence against women and girls took the floor to share meaningful experiences put in place on the ground: Gissela Chalá, Vicemayor of Quito and the first afro-descendant women to be elected in such position in Ecuador’s capital; Annie Chrystel Limbourg, Deputy Mayor of Libreville (Gabon) and a leading figure in the African network of locally elected women; Angelica Olivares, Deputy Director of Inclusion and Social Welfare of Iztapalapa, the most populous municipality of Mexico City; and Fabiana Goyeneche, International Relations Director of Montevideo (Uruguay) and a leading figure in Latin American municipalism.

Their interventions highlighted the key role of institutionalizing local efforts to address VAWG. They also stressed how VAWG and city-making (public space, social life) are closely intertwined, making a strong case in favor of considering this issue as a core concern in any right to the city vision. They agreed on the need to advance more ambitious policies face to the COVID-19 crisis, and to make sure that local feminist leadership leads the way to a better, more equal future.

Listening to the call to promote “cooperation based on sorority and shared values”, Seine Saint Denis leading figures in the fight against VAWG and promoting decentralized cooperation with the world (Ernestine Ronai and Magali Fricaudet respectively) introduced the FICOL project as a very concrete platform to advance this common agenda. Seine Saint Denis is ready to contribute on the basis of its rich, twenty years-old policy-making experience.

Ngazidja (Comores) Governor Sitti Farouata Mhoudine and Jenin (Palestine) Mayor Al Sadi Fayes showed their readiness to join the FICOL project. Both are historical partners of Seine Saint Denis, and they are now eager to exchange with other local governments from across the world on how to design effective policies to address VAWG.