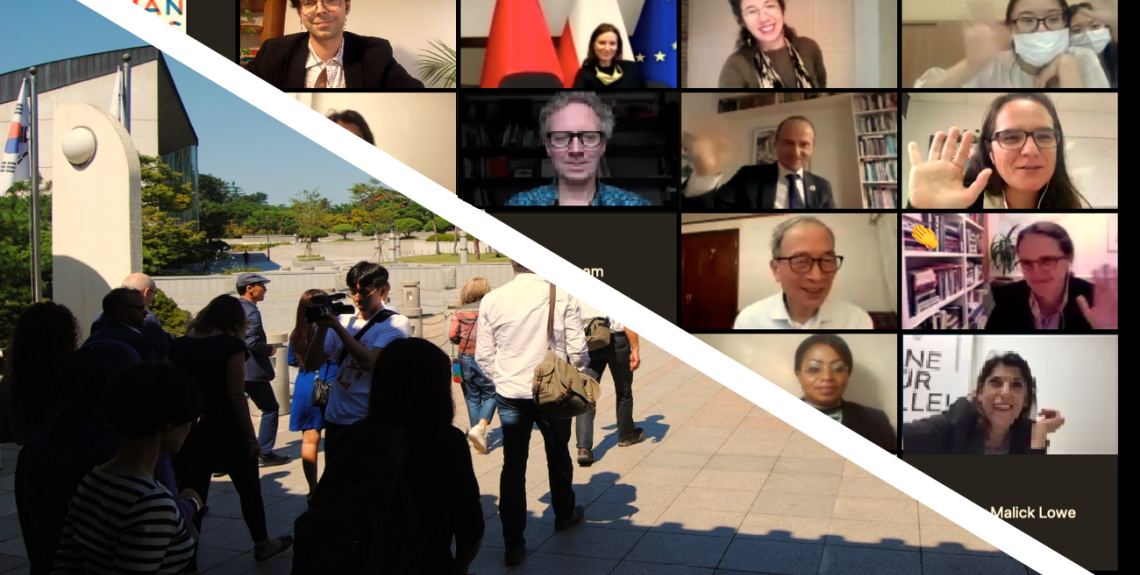 The 10th edition of the World Human Rights Cities Forum (WHRCF) was held from 7 to 10 October in an integrated setting, with sessions taking place both in Gwangju as well as online. In pioneering the use of digital methodologies, the Forum managed to maintain its spirit and meaningful impact both in Korea as well as abroad - in spite of the current context, marked by physical distancing and travel restrictions. This successful celebration of the Forum (which the UCLG-CSIPDHR co-organized along its partners from the Gwangju International Centre and the Raoul Wallenberg Institute for Human Rights) allowed to position the human rights cities movement as a key international stakeholder in  pushing for positive transformation through rights-inspired action face to the COVID-19 crisis.

This Forum’s edition devoted a specific focus to how human rights cities addressed historical memory through transformative approaches, including civic education programmes and the strengthening of democratic values. Local governments and human rights defenders presented their own related initiatives, reflecting also on the links with democratic struggles and social mobilization events of today. This was due to remembrance events held in the same city of Gwangju around the 40th anniversary of its May 18 Democratic Uprising (1980).

The Forum also focused on the social crisis caused by the COVID-19 pandemic and how local governments are enshrining the rights-based approach to provide more inclusive and effective answers to the needs of their populations. A Plenary Session co-organized by the UCLG-CSIPDHR and UCLG-ASPAC shed light on challenges experienced by local governments in the Asia Pacific region, as well as on their rights-based policies - inspired by principles of transparency, accountability, non-discrimination or participation.

Active local governments within the Committee took an active role in the Forum, establishing meaningful links between the key messages on human rights developed in UCLG and the Gwangju’s Forum. The Mayors of L’Ariana (Tunisia) and Iztapalapa (Mexico) focused on one hand on political and democratic issues, stressing the need to build transparent, accountable and participatory municipal institutions to gain citizens' trust and bring about social and economic rights. The directress of Buenos Aires’ ESMA Museum also presented the latest initiatives of this landmark museum in Argentina remembering state violence of the civic-military dictatorship (1976-1983), which focuses on fostering civic education and democratic commitment among new generations.

The local governments of Grigny (France) and Valencia (Spain) focused on the other hand on their responses to the COVID-19 pandemic. While the first recalled how inequalities are growing at an unprecedented pace and that immediate action is needed to prevent a worsened social crisis, the second focused on emphasizing the need to tackle hate speech and discrimination. Both cities also presented those human rights inspired policies they have put in place over these last months seeking to leave no one behind. The UN Special Rapporteur on Adequate Housing also took place in Plenary Session III to present the conclusion of his latest report on “COVID-19 and Right to Housing”.

The UCLG-CSIPDHR also organized, on the occasion of the Forum, a High-Level Dialogue on the Future of the International Human Rights Cities Movement. This closed meeting gathered a delegation of fifteen local governments (among which nine mayors) to discuss with representatives of the OHCHR and the Human Rights Council on ways forward to strengthening partnership and the participation of cities within UN Human Rights bodies. This meeting gave direct follow-up to last year’s landmark meeting held in Geneva on this same issue, which already gathered a large delegation of mayors and local governments.

This was a good opportunity for local governments to explore synergies with the OHCHR’s Deputy High Commissioner Nada al Nashif, who paid tribute “to the leadership of local governments for their courage and resourcefulness in responding to the pandemic”. Lim Sang-beom (Republic of Korea Permanent Mission in Geneva) also shared with participants how the Human Rights Council recently adopted a new resolution calling to advance the “Local Governments and Human Rights” agenda through the development of a new report to be developed by the OHCHR after the participation of local governments and human rights city stakeholders.