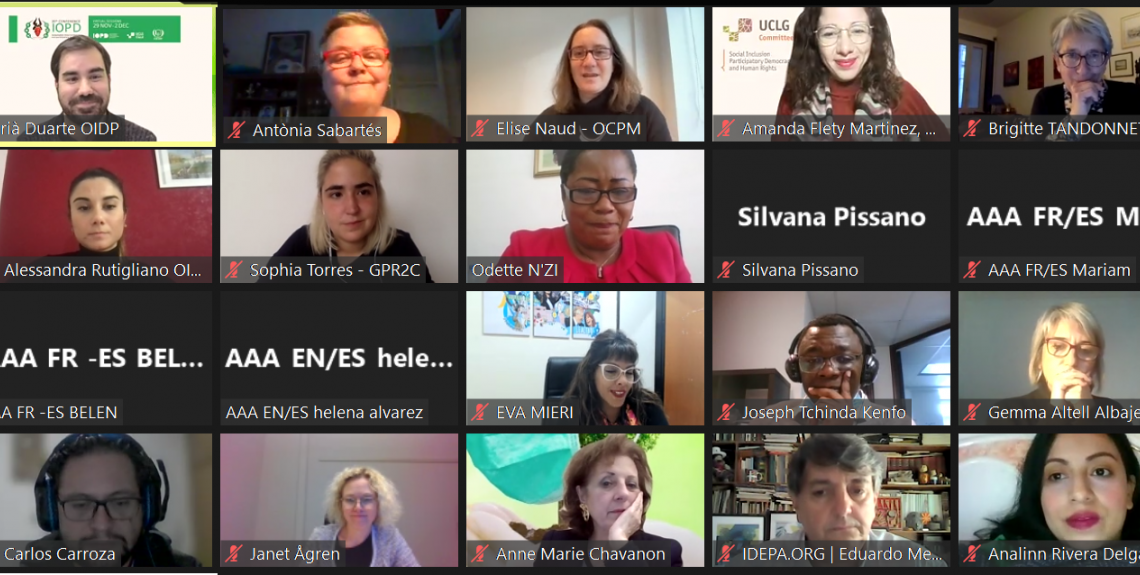 Last December 1st, our Committee organized the special session “Municipalism, social movements and feminist approaches”. The event highlighted local government perspectives on municipal cooperation with the feminist movement and local human rights defenders within  the IOPD Conference. Interventions by featured local leaders in the Committee and beyond highlighted the role of these co-creation efforts in achieving more inclusive and democratic urban territories, which care for the rights of all their residents.

The crucial role of women participation in local government, especially through their democratic election as mayors, deputy mayors or councillors, was highlighted by most participants. They also stressed the importance of mainstreaming the gender-based approach in local government, through the adoption of dedicated women secretariats and local action plans on gender equality. These two parallel processes contribute to transforming public administration from within, and would have not been possible without the constant support of feminist organizing and advocacy.

These new ways for exercising leadership are not only changing the way local governments organize, but also how they relate to residents and communities at large. Women politics and the "feminization of politics" foster in this sense greater decentralization of power at the neighborhood level, and focus on building trust through consensus and active hearing.

Local elected women are also bringing forward many innovative approaches to public action, such as caring, buen vivir (good living) or ecofeminism. Women rights and environmental rights are linked through intergenerational solidarity. Women mayors also push for intercultural agendas recognizing the plural identities of urban territories. Finally, many women mayors, deputy mayors and councillors also embrace the right to the city vision. They do so not only seeking to propose an expanded human rights agenda, but also new pathways to guarantee uphold these rights.

Participants to the event stressed the key role of participatory democracy bodies to channel residents' participation in public affairs. However, they also recognized how these bodies tend to exacerbate inequalities between men and women - particularly, inequality in participation, as men tend to participate more in public events and spaces.

Local governments are addressing these disparities through the new participatory bodies that allow women to speak more often and with a louder voice. In many contexts, local governments also support women economic empowerment, facilitate caring services such as kindergarten or address violence in public affairs to foster women participation.

Local leaders highlighted the key role of deepening dialogue with the feminist movement as a matter to strenghten their work in public office as well as to achieve structural change. They also committed to reinforce international cooperation between local governments, feminist actors and human rights defenders, around the idea of international feminist municipalism, fully enshrined in the United Cities and Local Governments action plan. Accordingly, the coordinators of the UCLG-CSIPDHR and the IOPD invited local leaders to continue nourishing the UCLG conversation on feminist municipalism and women rights, bringing these messages to the UCLG Pact for the Future process.