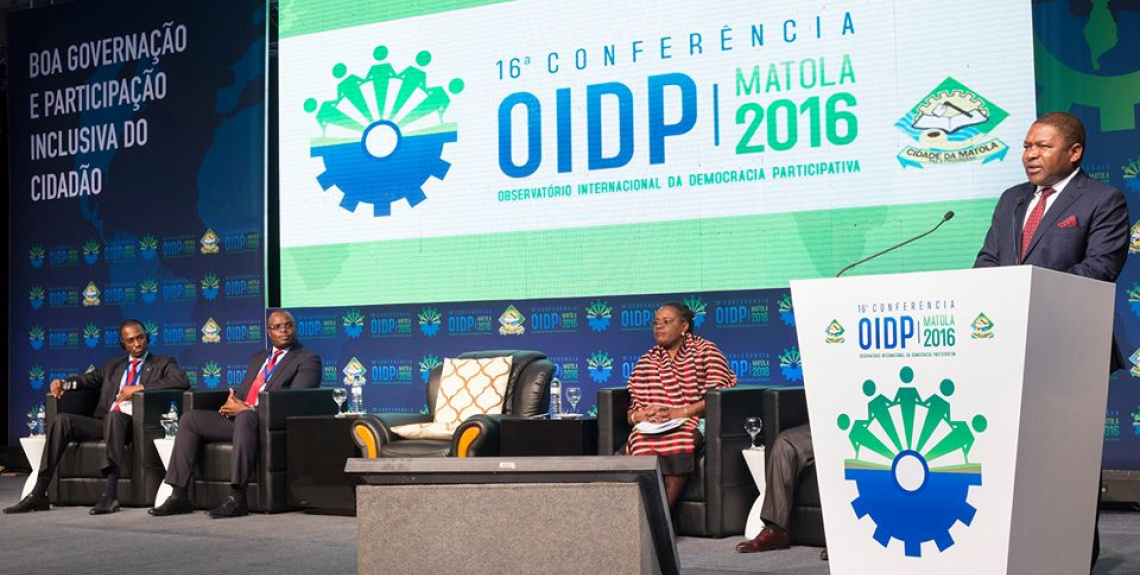 “Municipalities are key to consolidate democracy”. This statement from Fernando Pindado, (Director of Citizen Rights, Participation and Transparency of the Barcelona City Hall) was confirmed in the 16th Conference of the International Observatory of Participatory Democracy that took place in Matola, Mozambique, 4-6 May.

An international and diversified participation

1.500 delegates from local government, NGO and other institutions and organizations met from 4 to 6 May 2016, representing over 200 cities from 40 different countries. Hosted by the City Council, the conference was supported by the national government and other partners. The President of Mozambique opened the conference reminding that “leaders should build capacity and not be masters –the people are the boss”.

On the occasion of the conference, the IOPD hold its annual assembly and renewed its Presidency –which will be held by the city of Montreal (Quebec, Canada). Members recognized the dynamic leadership of Mayor Calisto Cossa, who started several participatory policies and programs in Matola and promoted the IOPD at global level –particularly in Africa. At local level, the IOPD promotion was especially successful in schools: “young people are highly interested in participating, and IOPD builds understanding about the way to get involved in local affairs and politics”.

Roundtables and plenary sessions allowed discussions and exchange on participatory budgeting; the relationship between arts and democracy; consultation and deliberative processes; education in democratic values; the role of civil society organizations; the New Urban Agenda’s impact on participatory democracy; the development of new participatory methodologies and digital platforms; the importance of a gender approach in participation, etc

Finally, the IPOD renewed its Presidency, which will be held for the next year by the Montréal Bureau of Public Consultation –this city will also host the IOPD Conference in 2017..

The African experience of participatory democracy

Participatory democracy is gaining importance in the political context of African cities.  Bachir Kanouté, IOPD African coordinator, showed the rapid spread of participatory budgeting, which is currently being implemented in 417 African municipalities. This confirms the need for a real decentralization and new democratic tools that pay special attention to the inclusion of young people –this generation is essential to consolidate democracy.

UCLG was represented at the Conference by members of its World Secretariat, the UCLG-Africa secretariat and the Secretariats of the Committees on Social Inclusion, Participatory Democracy and Human Rights and on Peripheral Cities. Both Committees relied also on the political representation of their respective presidencies members: Gwangju, Barcelona, Madrid, Canoas and Nanterre.

IOPD expressed its will to deepen its cooperation with UCLG. In this regard, IOPD Africa will also sign an agreement with UCLG Africa to promote and support participatory democracy initiatives

Finally, the City of Canoas was awarded with the X Distinction “Best Practice in Citizen Participation”. The jury appreciated its citizen participation system, especially the diversity of interaction between citizens and local government that this system enables and the continuity that it has had since its establishment in 2009. The “Public consultation on reducing dependence on fossil fuels” carried out in Montreal (Canada) was finalist of the award.

Five other projects received the jury’s acknowledgement: the Ampasy Nahampoana (Madagascar) participatory budgeting process; the “Your home, our commitment” program of the Basque Government (Spain); the “Health Impact Assessment” carried out in Plaine Commune (France), which implemented an innovative methodology to evaluate regional infrastructure’s impact on inhabitants’ health; the “I participate” policy from Pamela (Portugal), and the Rumiñahui (Ecuador) system of management and participation”.

You can access to all projects’ factsheets through this link.