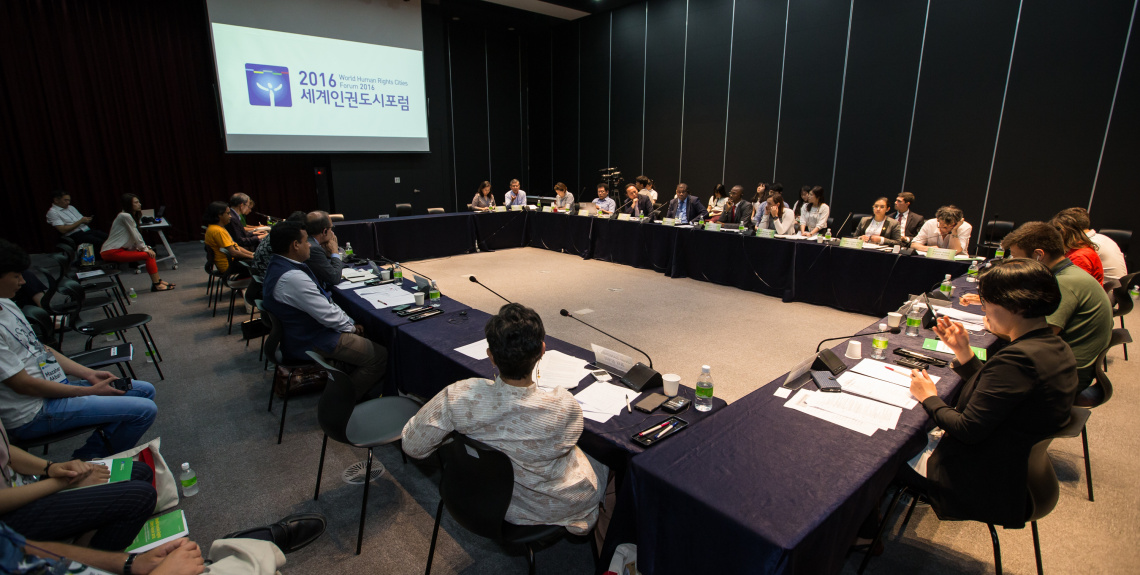 From 21 to 23 July 2016, our co-presidents of the Metropolitan City of Gwangju and Gwangju International Center organized the sixth edition of the World Human Rights Cities Forum (WHRCF) with the support of UCLG Committee on Social Inclusion, Participatory Democracy and Human Rights. The Forum strengthened the global network of human rights cities and framed the issue of human rights in the city and the right to the city within the Habitat III process. As part of the Forum, the Committee held its annual meeting, which allowed to present the work undertaken during 2015 and to lay the ground for the Committee’s strategy for next years.

The World Human Rights Cities Forum holds each year since 2011, in commemoration of Gwangju’s Democratic Movement of May 1980, when citizens rose against the military regime in the hope of achieving the democratization of Korea. That movement spread to other Asian countries in the 1980s and 1990s and Gwangju is now a symbolic place for Human Rights in Asia where the Asian Human Rights Charter was adopted in 1998.

Indeed, the 2016 WHRCF took place for the very first time in the Asia Culture Center, built on the same surface where the headquarters of the province government were when the May 18 democratic movement took place, and a tour to the May 18 Memorial allowed international participants to share with Gwangju’s community part of their strong memory and to feel their important sense of human rights, peace and freedom values.

In this context, the WHRCF aims to carry out the human rights city vision and share information and experiences in planning and building cities concerned on Human Rights.  The concept of Human Rights City was defined during the 2011 Forum, and since 2014 it is set into Gwangju guiding principles. A human rights city is “both a local community and a socio-political process in the local context where human rights play a key role as the fundamental values and guiding principles” (2011 WHRCF Final Declaration).

The theme of the sixth edition of the Forum was “Building Human Habitat friendly Cities: Sustainable Development, Housing and Environment”, in order to highlight the importance of expanding the movement and to promote solidarity and mutual cooperation. This edition had a strong focus on the Habitat III process, in order to promote the insertion of the Human Rights cities’ vision in the New Urban Agenda (to be adopted in the Habitat III conference in Quito, October 2016). Participants were also invited to attend the UCLG Congress in Bogota (12-15 October) in order to share their perspectives on the right to the city and the New Urban Agenda. Finally, the Declaration adopted was used as a basic document for the conception and development of the side event organized by the Committee at the Habitat III third and last Preparatory Committee in Surabaya (25-27 July): “Towards Human Rights Cities in the New Urban Agenda”.

A plurality of participants and topics

The Forum gathered speakers from many different countries, mainly Asian ones. There were representatives from Gwangju, Seoul, Jeju, Seongnam,  Plaine Commune, Mexico City, Badalona, Barcelona, Delhi, Inhambane and Lampung Kimur, among other city governments, along with experts and representatives of organizations and institutions as the Raoul Wallenberg Institute of Human Rights, the Office of the UN High Commissioner for Human Rights or the NGO ENDA-ECOPOP –as well as activists from civil society and researchers.

The Forum was organized around eight thematic sessions that dealt with crucial issues such as environment, gender issues, disability and human rights, social economy and urban regeneration, the elderly and housing, education policy, migrants and refugees, and children and youth. There was also a plenary session focused to the right to the city and the need for getting the right to the city included in the Habitat III Agenda. Finally, a human rights experts’ workshop coordinated by the Korea Foundation for Human Rights allowed developing guidelines for the concrete implementation of human rights standards and policies in cities.

The Forum hosted the Committee meeting

As a special session of the Forum, it was held the Committee’s annual meeting, which was chaired by Mr. YOON Jang-Hyun, Mayor of Gwangju and Co-President of the Committee, and which relied on the participation of representatives of cities, regions, organizations and institutions from all over the world –South Korea, Indonesia, Senegal, Spain, France, Mexico, Mozambique, India, Philippines… The Committee Secretariat presented the 2015 Activities Report and the 2016 Action Plan, and opened to floor to all participants to discuss and define the issues and strategic work lines to orient the Committee’s action for next years.

The Final Declaration, adopted at the end of the Forum, underlines the participant’s commitment for Human Rights Cities and for their enhancement and growth through cities and citizens’ networks such as the Committee on Social Inclusion, Participatory Democracy and Human Rights. It also reaffirms an active participation of local governments committed to Human Rights in international policy processes such as Habitat III or the implementation of the Sustainable Development Goals (SDGs) –which are essential to build fair, inclusive, democratic and sustainable territories.