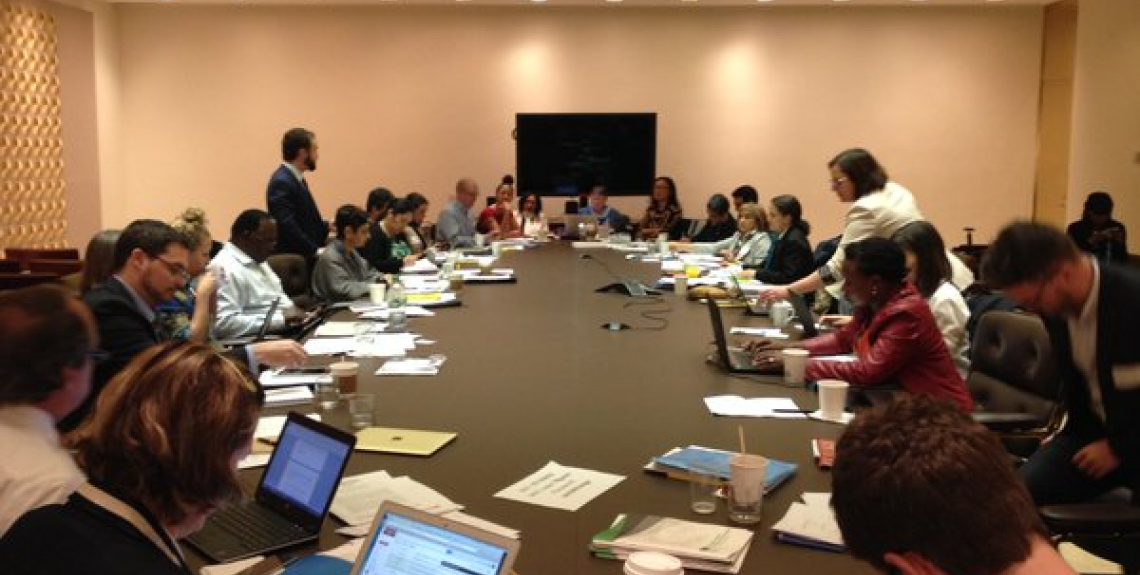 From 3 to 5 May, the Committee on Social Inclusion, Participatory Democracy and Human Rights attended a human rights experts’ meeting convened by the Office of the UN High Commissioner for Human Rights and the Habitat III Secretariat in New York. It was an occasion to share human rights advocates’ analysis regarding the New Urban Agenda.

The meeting, hold upon the initiative of the UN High Commissioner for Human Rights and the Habitat III Secretariat, aimed at analysing the world’s urbanisation process under the light of human rights recognised by international treaties, as well as to provide recommendations for the New Urban Agenda –which will be defined in the Habitat III Summit in Quito, 17-21 October 2016.

During the two days meeting, around thirty experts from the UN, civil society and local governments from all over the world exchanged perspectives on the New Urban Agenda’s main axes: social cohesion and equity, urban economy, spatial development, right to housing…

The discussions that took place revealed the need for adopting a human rights mainstreaming in the New Urban Agenda, based on the analysis of the consequences that the absence of such approach has had on the urban development processes: inequality and lack of access to essential services, social and spatial segregations, systematic violations of the right to housing –that infringes the right to life of millions of homeless people, and results in massive evictions of informal dwellers and in many forms of discriminations.

According to the experts, if the rights recognised on the Habitat II Agenda (Istanbul, 1996) were never implemented, this is due to the fact that the global urbanisation process has been mostly oriented to economic growth and the attraction of private investments, without ensuring social guarantees. Fiscal austerity and structural adjustments policies have prevented public sector to implement all necessary means to guarantee their inhabitants rights –and, eventually, have prevented cities from becoming places for the majority of the people to improve their lives.

The discussion also insisted on the need to concrete new social contracts at local level, with all inhabitants’ participation –whatever their administrative status. These social contracts must be based on rights to really guarantee social cohesion. To this end, it becomes crucial to frame all market stakeholders –like real estate developers- within a regulation aiming at guaranteeing human rights’ compliance. Also, the creation of a progressive and fair tax system was identified as a critical need for cities to become spaces for dignified lives.

Finally, there was a major consensus on the need to monitor the implementation of the New Urban Agenda through human rights’ indicators that will enable a stronger accountability of national and local governments, as well as other stakeholders that participate in the configuration of the urban fabric –particularly the business sector.

As this meeting’s outcome, a position paper on the need to put Human Rights at the heart of the in the New Urban Agenda will be issued in the coming days.

Finally, after the experts’ meeting, the Committee was invited on May 6th to present the results of this two-day work in the UN Headquarters and to contribute to recommendations for UN State members’ delegations.

This meeting was held under the auspices of Ecuador’s National Government Representation –which co-chairs the Habitat III Conference- and was also attended by Lorena Zarate, President of the Habitat International Coalition (HIC) and Anselmo Lee, from the Korea Human Rights Foundation. As part of her introductory remarks, Ecuador delegate, Ms Helena Yanez Loza, recalled her government’s commitment for the Right to the City in the New Urban Agenda. This Right is recognised by the Ecuador’s Constitution and was defined by the delegate as the “territorialisation of the rights recognised by international treaties”.