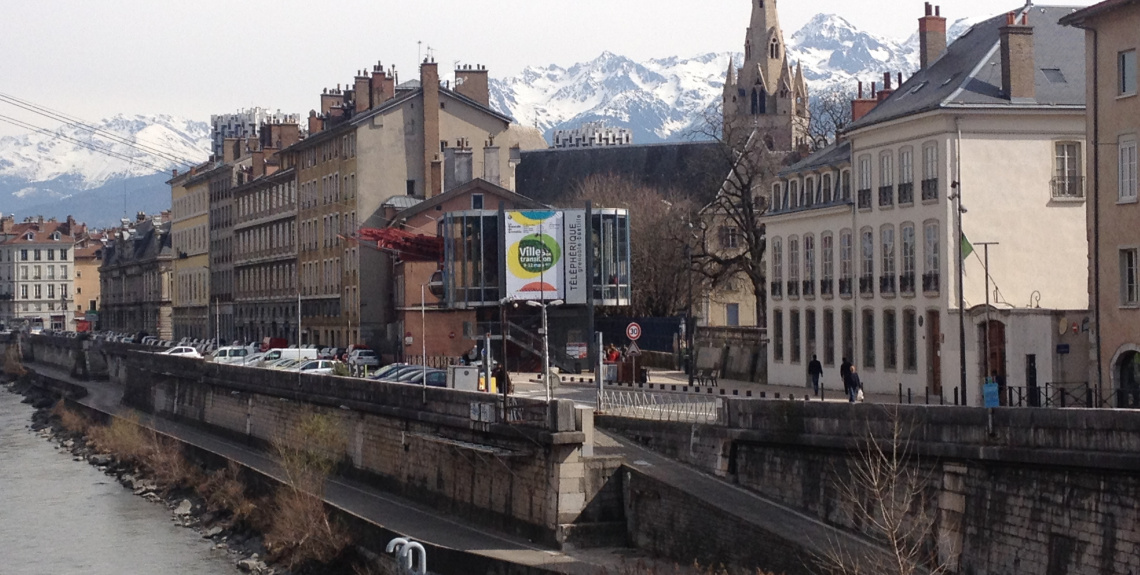 In Grenoble, Local Government and civil society organizations address the issue of the Right to the City and the Ecological Transition

From 7 to 12 March 2017, the Committee on Social Inclusion, Participatory Democracy and Human Rights went to Grenoble to take part to the Biennale des Villes en Transition (Biennale of Cities in Transition), organized by the City Council of Grenoble, as well as to the meetings on critical geopolitics on the “Right to the City” organized by the Institute of Alpine Geography, the Association Modus Operandi and a Grenoble-based collective of organizations and inhabitants.

A myriad of initiatives about the future of cities

At the beginning of March, 2017, Grenoble hosted a great number of activities about the future of cities. Five large events were organized by numerous actors: the City Council of Grenoble, social movements, professional and academia networks, as well as associations of badly-housed and homeless people. The official events organized by Grenoble City hall were focused on debating around the social, ecological, economic and democratic transition in the framework of the COP21 engagements. In parallel, social movements, as well as some critical scholars, referred to the concept of the “Right to the City” to recall the need to build an inclusive city with all its inhabitants, during the Meetings of Critical Geopolitics.

As a result, throughout the week from 7 to 12 March, themes such as the Right to Housing, the management of common goods and public spaces as well as the social, economic and ecological transition were at the heart of the debate.

The Committee actively took part in the official programme of the Biennale, as well as in the events related to the Right to the City organized by the Grenoblois movement. On Thursday 9th March, a first roundtable took place in the framework of the Meetings of Critical Geopolitics under the title “What it is the Right to the City?”

This event was held in Grenoble’s Institute of Alpine Geography.

During this event, Claire Revol, professor and researcher at the Institute of Alpine Geography, as well as a philosopher, urbanist and specialist on Henri Lefebvre’s work, presented the origins of the concept of the Right to the City. Marianne Morange, professor and researcher at the Paris-Diderot University, as well as member of the DALVAA Group, addressed some issues related to the actualization of this notion in the light of the ongoing neo-liberal context, in particular regard to its internationalization. Her intervention is available online here.

Finally, Magali Fricaudet, coordinator of the Committee, emphasised the role of this concept as an axis of alliance between social movements, NGOs and Local Governments, from the 2000’s to Habitat III Conference (2016), which for the first time mentioned the Right to the City in a UN document. The debate was moderated by Myriam Houssay-Holzschuch, a geography professor at the Grenoble Alpes University, and David-Gabriel Bodinier, coordinator of the Popular Urbanism Workshop (Atelier d’Urbanisme Populaire) of the district of La Villeneuve. Following the presentations, an enriching exchange of views also took place with an audience of students and committed citizens.

On Friday 10th March, the Committee took part in the roundtable “Tomorrow, all of us actors of the city?” on aspects of the ecological transition related to local democracy. During this debate, the representatives of the municipalities of Grenoble, Sfax and Cascais and the Regional Council of Wallonia, presented their practices on local democracy through mechanisms of direct democracy, such as participatory budgets.

The Wallonian region also presented its strategy for social cohesion, based on Human Rights and the participation of people. On the other hand,  collectives such as “Parlons-en which presented participation practice focused on homeless people, or the Villeray collective, which advocated for the ecological transition through citizens’ initiatives in Montreal, emphasised the necessity to take into consideration grassroots inhabitants’ practices. The Committee presented a global vision of the trends in where Local Governments, citizens and social organizations co-create cities.

The final meeting “From the Right to the City to the new Municipalism” took place in the presence of Gustave Massiah, from AITEC, Giuseppe Gaccia, from European Alternatives, César Ochoa, from Barcelona en Comú, Alvaro Puertas Robinas, from Habitat International Coalition, and Magali Fricaudet, the coordinator of the Committee. The debate was moderated by David-Gabriel Bodinier, from the Popular Urbanism Workshop of La Villeneuve.

The debate allowed to discuss the perspectives emerged from a new generation of local governments based on local social movements and on the possibilities for municipalism to be an alternative to the neoliberal commodification of cities and its impact on social goods and wellbeing. The minutes of this meeting are available online (only in French).

In a nutshell, the intense program of activities of the Biennial showed the richness of citizen initiatives carried out by Grenoble: the citizen radio La Voix des Gens, the urban walks on the steps of exiled people, the assembly of poorly-housed people, the Popular Urbanism Workshop of the Villeneuve, the Observatory on Non-Take Up (NTU) of Social Rights and Public Services (ODENORE) or the opening of the cultural programming to citizens, among others.

As Eric Piolle, Mayor of Grenoble, said in an interview for the municipal newspaper Gre.mag,

“Through putting in common different projects, the Biennale contributes to federating all the stakeholders of the transition, diverse but until now isolated. Together, we have to invent a new way of living the city, where the multiple uses of places must replace its under-use or degradation, where sharing replace competition and where conviviality replaces isolation. Neither the climate change nor the breakdown of our social cohesion are unavoidable phenomena".

During the Biennale, a meeting took place with Bernard Macret, Deputy Mayor in charge of International Solidarity, and Eric Recoura, Director of International Relations and European Action of the city of Grenoble, to whom Magali Fricaudet presented the Committee and its action plan.

A meeting also took place with Carine Jansen, Director of Social Cohesion of the Region of Wallonia and a member of the network Together (C-Responsibility Territories), leading to their adherence to the network of the Committee.

Furthermore, several meetings were also held with the general director of the city of Sfax, in order to explore the possibilities of common projects on the issue of migrants’ inclusion.

In perspective, this mission represented an opportunity to share knowledge and experiences between cities and social movements, as well as to deepen our links with the Grenoblois members of the Global Platform for the Right to the City.