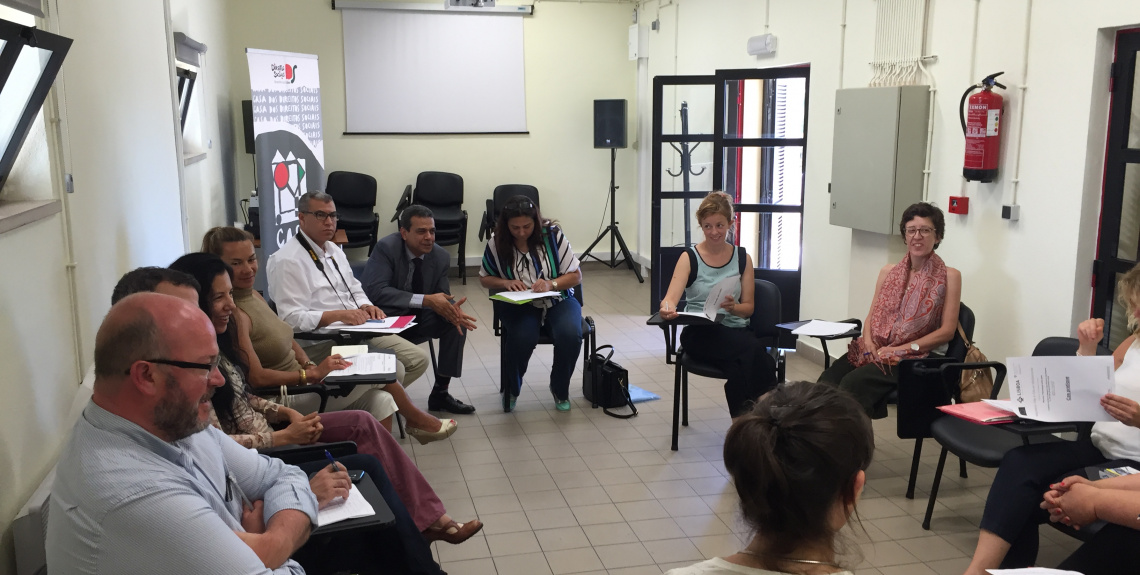 The Committee coordinates a peer-learning session on “Social cohesion and inter-cultural and inter-religious dialogue”, between migration host cities

As part of the Mediterranean City-to-City Migration Project (MC2CM), the UCLG Committee on Social Inclusion, Participatory Democracy and Human Rights coordinated the first peer-exchange session on local policies for social cohesion, which took place in Lisbon on July 12-13, with the participation of representatives from 8 European and Southern- Mediterranean cities.

Social cohesion and inter-cultural and inter-religious dialogue, an essential axis for migrants’ integration at local level

Migration is a global phenomenon with local consequences –migrants leave a territory for another, a city for another. In this context, local governments have a key role to play regarding the inclusion of migrants in cities and the creation, maintenance and enhancement of social cohesion. They also have an essential role in the prevention of racism and xenophobia, as well as regarding the facilitation of an intercultural and inter-religious dialogue –which enables a better mutual knowledge between city inhabitants and contributes to strengthen conviviality.

The first peer-learning of the Mediterranean City-to-City Migration project addressed this topic, through a session named “Social Cohesion and intercultural and inter-religious dialogue: local governments’ role”.

The meeting, facilitated by the UCLG Committee on Social Inclusion, Participatory Democracy and Human Rights, took place in Lisbon on July 12-13, gathering participant cities (Amman, Lisbon, Lyon, Madrid, Tangier, Tunis, Turin and Vienna) and the Catalan Fund for Cooperation and Development (coordinator of the ULCG working group on Migrations and Co-Development) to share two days of common reflections, exchange of experiences and joint work on challenges concerning these issues at local level.

Gathering in Lisbon’s House of Social Rights –a municipal venue located in the peripheral neighbourhood of Bella Vista that aims at assisting projects of the whole city inhabitants-, around 20 participants shared the difficulties they are facing in their cities and exchanged concrete practices of social inclusion, through a participatory learning methodology.

In the first part, participants had an in-depth discussion on local governments’ role in local policy-making and implementation, as well as on the rights-based approach as vector for the development of such policies. This dialogue was mainly based on the reference paper drafted by the CSIPDHR. Most of remarks went to emphasize the financial constraints cities are facing, as well as centralization tends of national governments, which are often major obstacles for the implementation of inclusive policies. Furthermore, employment was also mentioned as vector for inclusion, even with its current scarcity in host cities. These constraints lead local governments to re-think their own role as social cohesion facilitators.

Then, participants were invited to explain the myths migrants’ social inclusion policies face in their territories, and to de-construct them. For instance, in Vienna a research recently found that the criminality rate is higher in neighbourhoods with native majority than in areas with migrant majority. Another example: in Amman, Syrian migrants are said to be “stealing” jobs to Jordanian people, whereas the reality is that Syrian people in Jordan are generally getting jobs previously quitted by Jordanian.  In addition, a research from the US Urban Institute on 21 US cities showed that migration, when accompanied with rights, has positive effects on employment rates –in opposition to main prejudgements about this issue.

The results of this activity were used as basis to draw a diagram including the constraints local governments’ have to face, highlighting those relating to the implementation of social inclusion and intercultural and inter-religious dialogue policies aiming at ensuring the inclusion of migrants as part of the local fabric. Particularly, participant cities highlighted the obstacles found in terms of human and financial resources management (lack of qualified personnel –mediators, interpreters- and difficulties to meet unforeseen needs), competence framework (need for a wider inter-institutional coordination and a greater flexibility of administrative systems) and decentralization (need for specific competences on migration), which are the main challenges to overcome in order to ensure an effective social cohesion in territories with significant migratory flows.

The exchanges kept going on in the afternoon, during a ground visit and presentations of experiences and case studies (mainly related to participation policies, to the common use of public spaces and to education on diversity). This enabled to highlight practices implemented by different cities to deal with the challenges described above and to jointly conceive new action strategies for concrete situations.

Common messages for social inclusion and intercultural and inter-religious dialogue

As a conclusion, participants agreed on 11 common recommendations:

The project’s next steps

Lisbon’s meeting was the first one of a series of seven thematic peer-learning sessions that will address the following topics:

The MC2CM project, funded by the European Union and the Swiss Agency for Development and Cooperation, is led by UCLG and the ICMPD (International Centre for Migration Policy Development) and has UN-Habitat as partner and UNCHR as associated organization.

The general aim of the project is to contribute to the improvement of migration’s governance at local level in a network of European and South-Mediterranean cities, with a view to integration and inclusion, as well as to migrants’ access to human rights and basic services. It is also oriented to enhancing cities’ capacities in this field.

For further information on the project you can refer UCLG webpage or contact mc2m@icmpd.org.