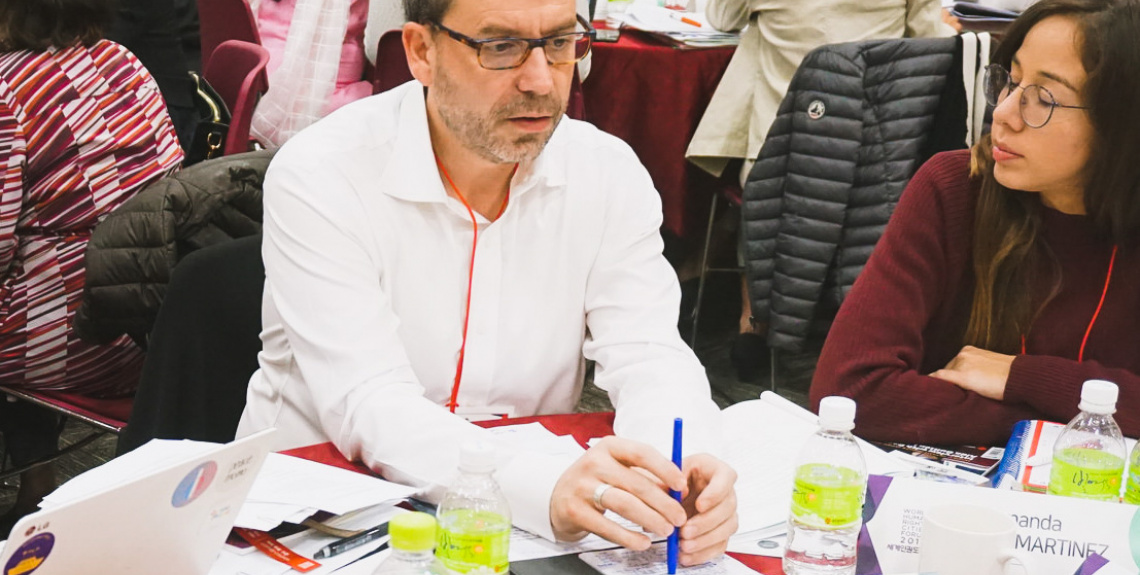 Grigny’s Mayor Call: For local governments that commit to defend the right to peace from the grassroots to the global level

Philippe Rio is the mayor of Grigny: a small town on the outskirts of Paris marked by strong inequalities compared to the richest districts of the French capital. Philippe Rio's commitment to defend social and spatial justice for city dwellers of peripheral cities has led him to become an active member of the French association “Ville & Banlieue” (City and Periphery), which aims to “foster neighborhood development in deprived territories, and to improve mainstream perceptions of peripheral cities”.

As a result of this commitment at home, Philippe Rio has also become a recognized, global advocate for the right to peace, becoming the president of the French Association of Mayors for Peace - AFCDRP.

Q1: Your interventions at the Forum focused on the relationship between the right to peace, the right to the city and human rights: Why is it important to strengthen the link between these three notions locally and internationally?

There can be no lasting peace without respect and enforcement of human rights. There is therefore a natural link between peace and human rights. Moreover, we live in an urban era; Indeed, it is a historic moment where most of humankind already lives in cities. For all these reasons, we can have neither peace nor human rights without sustainable urban development.

Living in sustainable cities becomes a necessary condition for achieving peace and respect for human rights in the city.

Despite the growing militarization of governments and the proliferation of conflicts around the world, civil society and local governments have a crucial counter-power role to play in the face of this new “arms race”, and to find peaceful solutions to conflicts across the world. 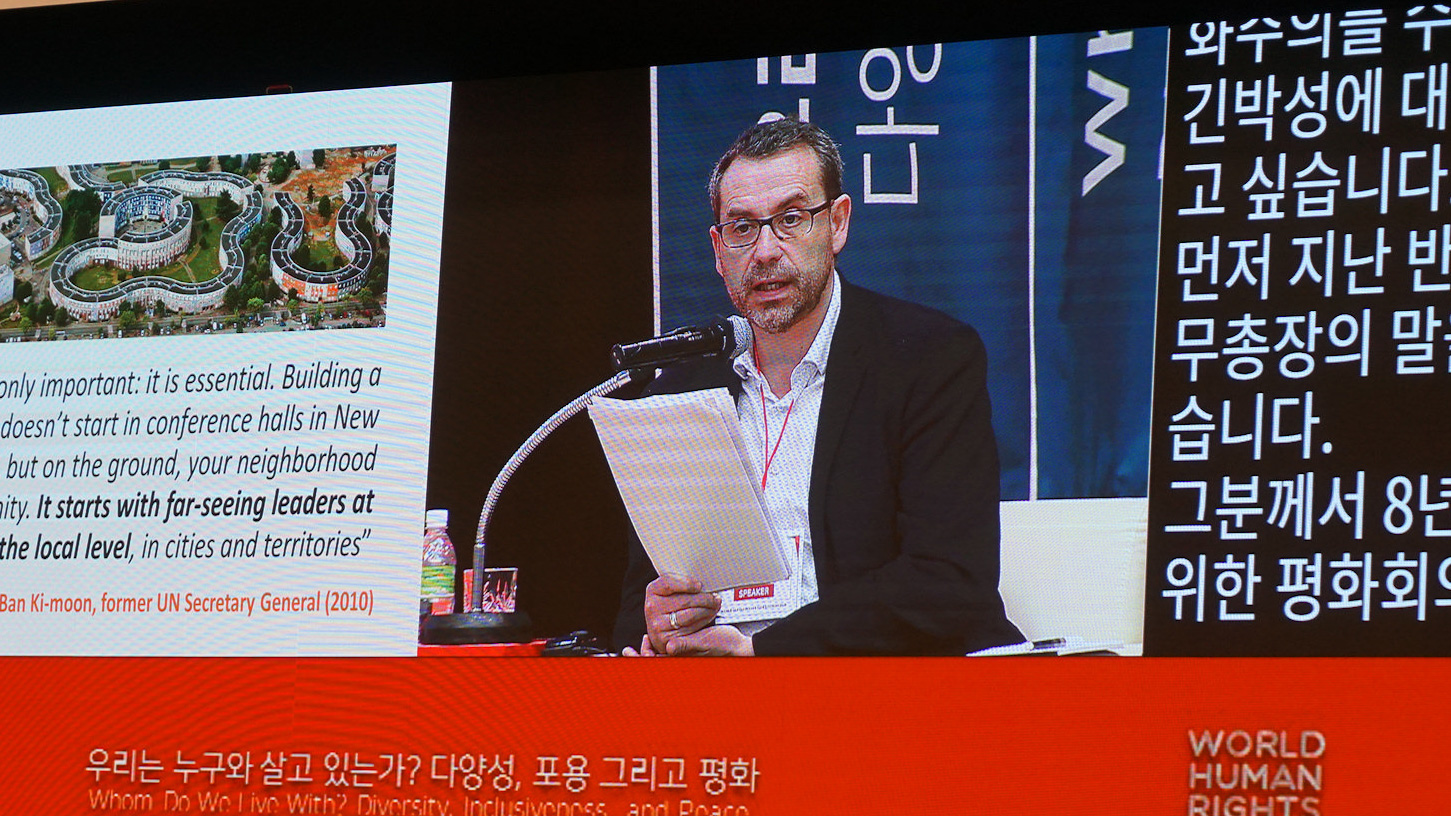 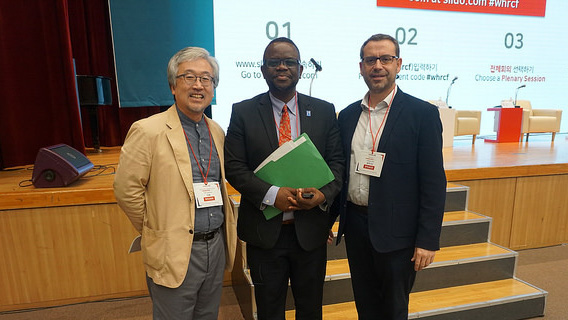 « Image 1 & 2 : Mayor Rio participation at the World Human Rights Cities Forum of Gwangju, where he presented his city's experience in favour of the right to peace in front of an international audience »

Q2: What is “peaceful” urban planning? How is this related to the rise of metropolitan areas?

The way we carry out urban planning can create social exclusion. Conversely, some speak of social urbanism. With “peaceful” urban planning I refer to building peaceful, inclusive and caring cities. Mainstream approaches to urban development, public space in our cities and urban planning regarding metropolization has led, today, to persistent inequalities.

These inequalities can be felt and are reflected in our own cities and territories. Therefore, we must ensure that urban planning recognizes these phenomena and helps to combat inequalities. Embracing an approach based on peace and respect for human rights is, in this context, an incredible tool for building inclusive cities and metropolitan areas. 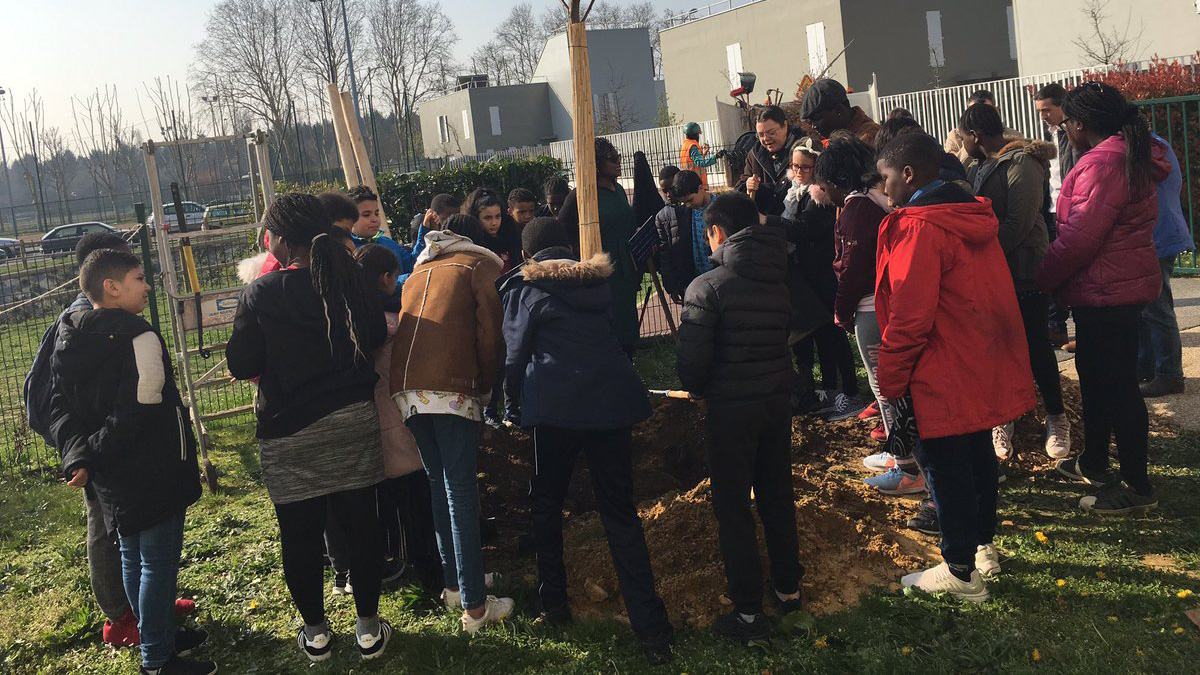 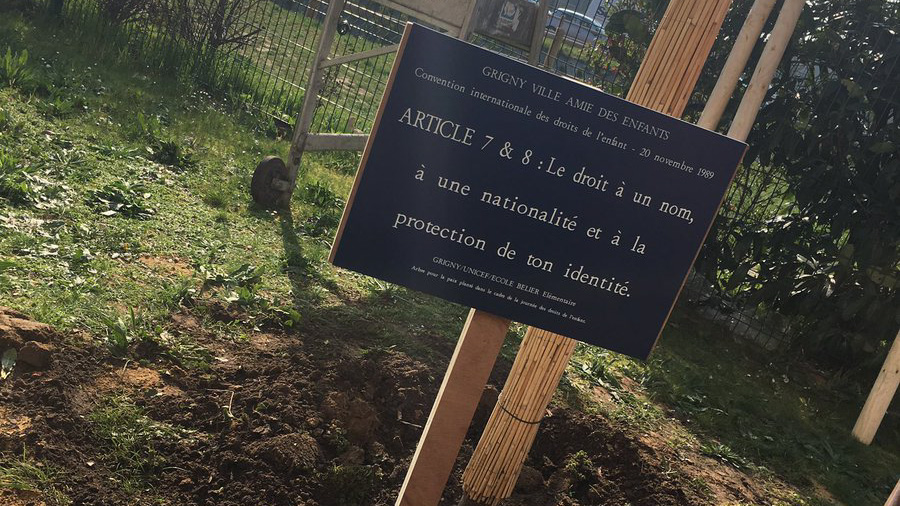 « Image 3 & 4 : Tree planting for peace. The sign at the right picture describes an article of the International Convention on the Rights of the Child »

Q3: Throughout your interventions you often referred to concepts like peace education and the culture of peace: How can municipal authorities work on these concepts at the local level?

The notion of “Culture of Peace” was defined by the Seville Manifesto in the early 1990s. UNESCO then clarified its eight principles, among which: Democracy, fighting against inequalities, achieving gender equality, security, promoting transparency, etc. (Find the full UNESCO principles on the Culture of Peace here).

Today we, local governments, can do two things to turn the culture of peace into a reality in our territories. The first step is to develop action plans aimed at promoting the culture of peace: Be it by mainstreaming it on our own local public policies, towards the way we relate to our fellow citizens, in the relation of proximity and everyday tasks we develop as public administration…

Promoting a culture of peace locally can also benefit from awareness-raising events. Popular education can target children and schools, but also adults and senior people. The most important thing is to disseminate its values across society and embed them to our every day action.

At the same time, local governments can carry out actions vis-à-vis international institutions, aimed at defending the right to peace as one of the universal values that compose the whole human rights family. In fact, this does not exist yet.

We must therefore carry out advocacy efforts so that international institutions make sure that the right to peace is fully recognized and defined as an inalienable right of all humankind. 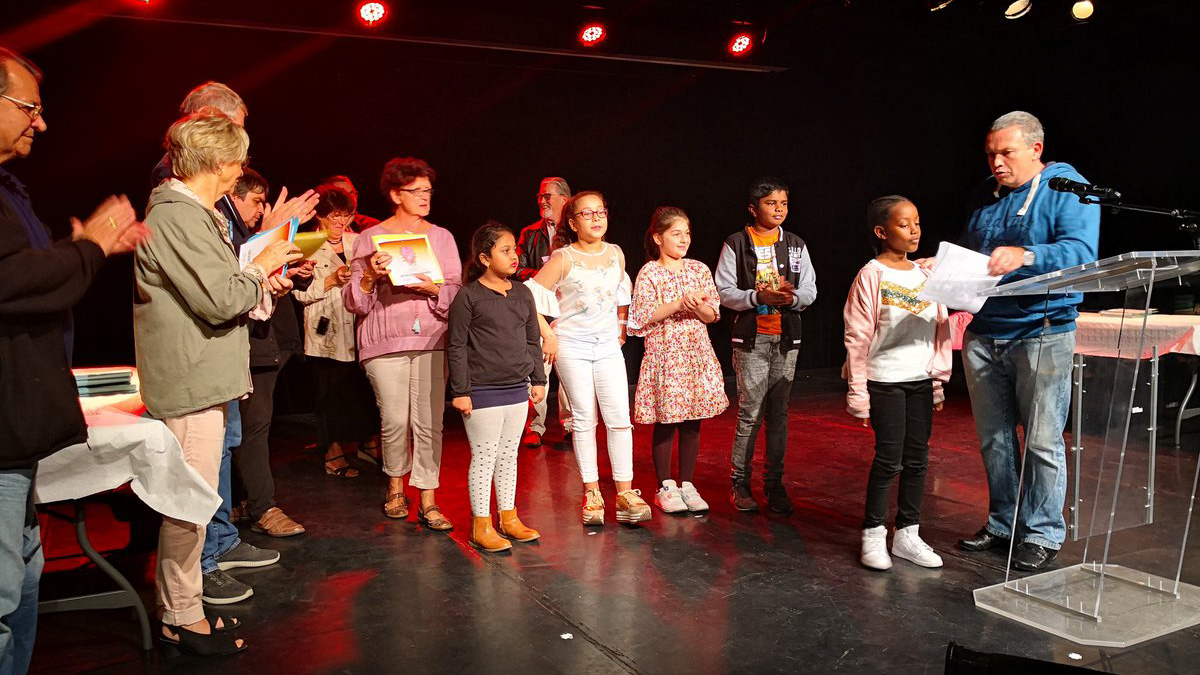 « Image 5 & 6 : Award ceremony of Grigny's young writer and young illustrator. Last year's edition was held under the them "Building peace in your neighborhood". The jury received more than 250 applications »

Q4: You are the president of the French Association of Municipalities, Departments and Regions for Peace (AFCDRP) – Mayors for Peace France. What are the priorities of your organization and what type of initiatives do you promote?

Mayors for Peace is a global organization founded and co-chaired by the mayors of Hiroshima and Nagasaki, who had to deal with the aftermath of the 1945 nuclear bombing. Hiroshima and Nagasaki remind us that, in the event of a military conflict, local authorities are the first institutions responsible for taking charge of reparation and normalization of everyday life. Thus, we believe Mayors must become leaders in preventing conflicts at a global scale. We must come together to proactively  defend and achieve peaceful societies.

In August 2017 was held the ninth general conference of Mayors for Peace, which as a global organization brings together more than 7.000 cities worldwide in 70 countries. On its 2017-20 action plan, we decided to focus on two main pillars: The first concerns the continuation of demilitarization campaigns around the world. We were happy to see that, in 2017, the Nobel Peace Prize awarded to ICAN: A collective of 500 associations – including Mayor for Peace – who led a citizen campaign in favor of the Treaty on the Prohibition of Nuclear Weapons approved by the United Nations. This is a first important victory for the global pacifist movement.

The second pillar of this Action Plan is to develop further the notion of “Culture of Peace” as previously described, and to pursue our efforts to continue building what we call safe and resilient cities. To this end, in the last months, members of Mayors for Peace across the world have been developing action plans at the local level to localize this culture among citizens, and to raise awareness on pacifist consciousness. 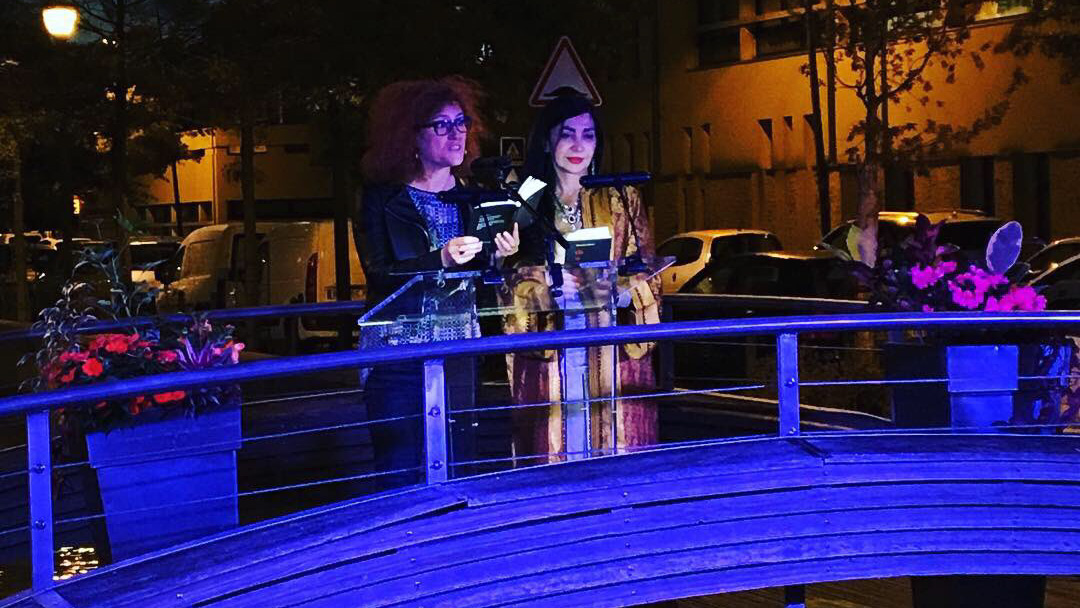 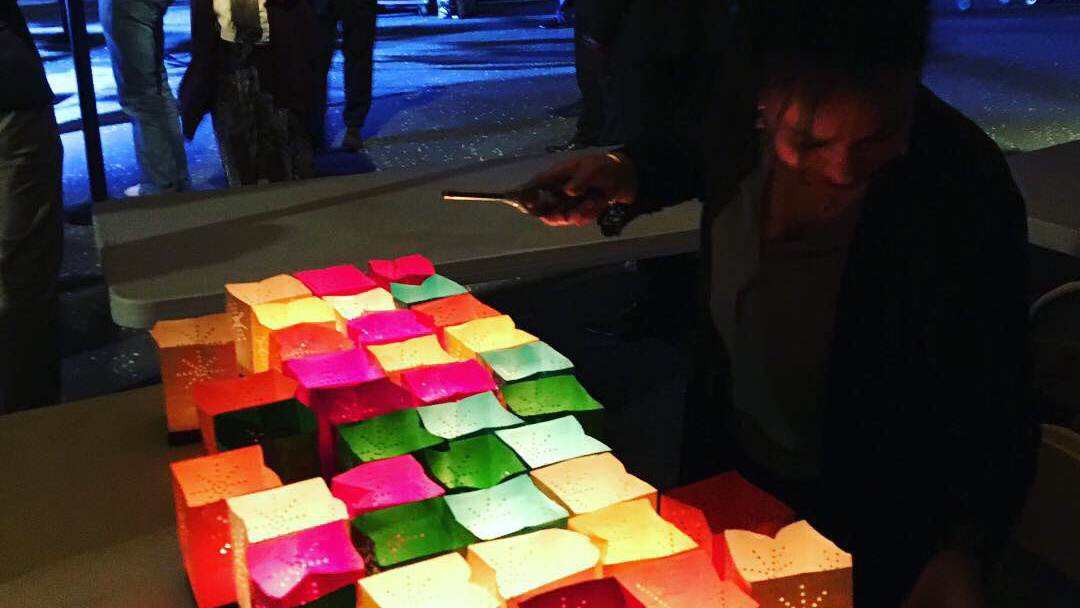 Q5: You keep on emphasizing the importance of cooperation between cities (municipalism), stating that the city is itself a place of resistance: What would you say to the mayors of the world for them to come together to defend the right to peace?

Citizens in our cities are ready to engage in favor of peace. People want peace, but the big leaders of this world do not speak of peace: They speak of war! We must, according to the relation of proximity that we have to our citizens as local governments, be at the forefront of new alliances that reaffirm the will of our citizens to live in a peaceful world.

There is a pacifist emergency, and local governments can be at the front of this citizen appeal.

People want peace. Every time we create an event or a pacifist initiative – for children, for parents – there is a change of outlook: In order for better living together, we must build a world of peace! 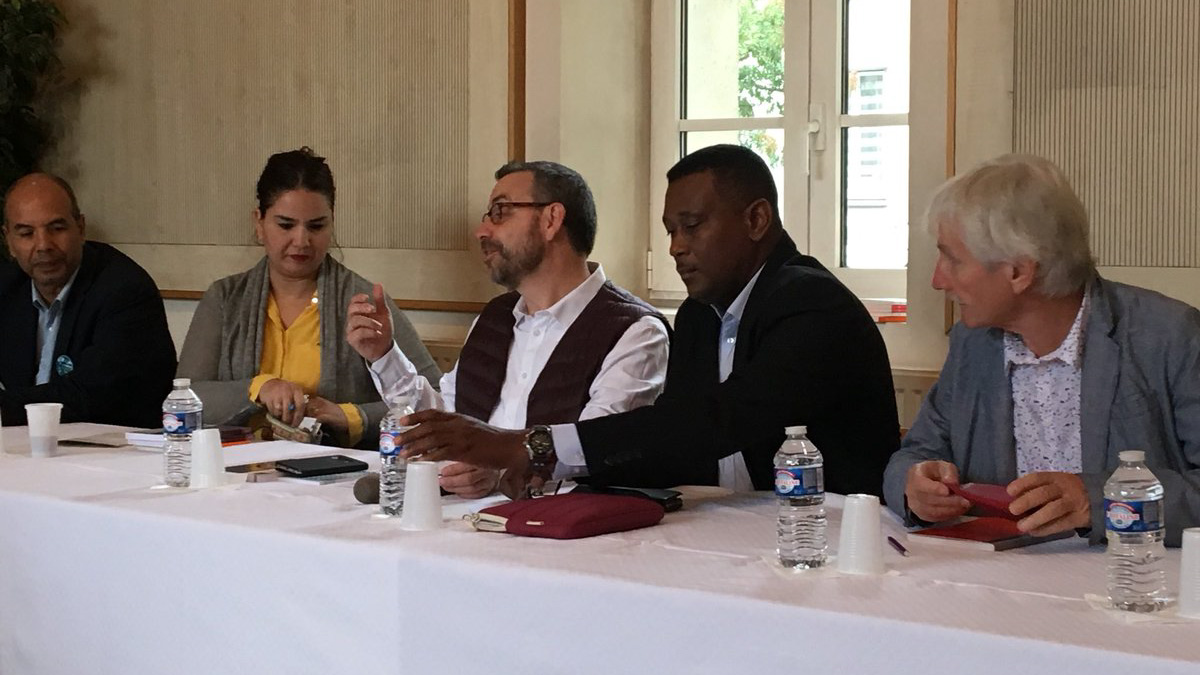 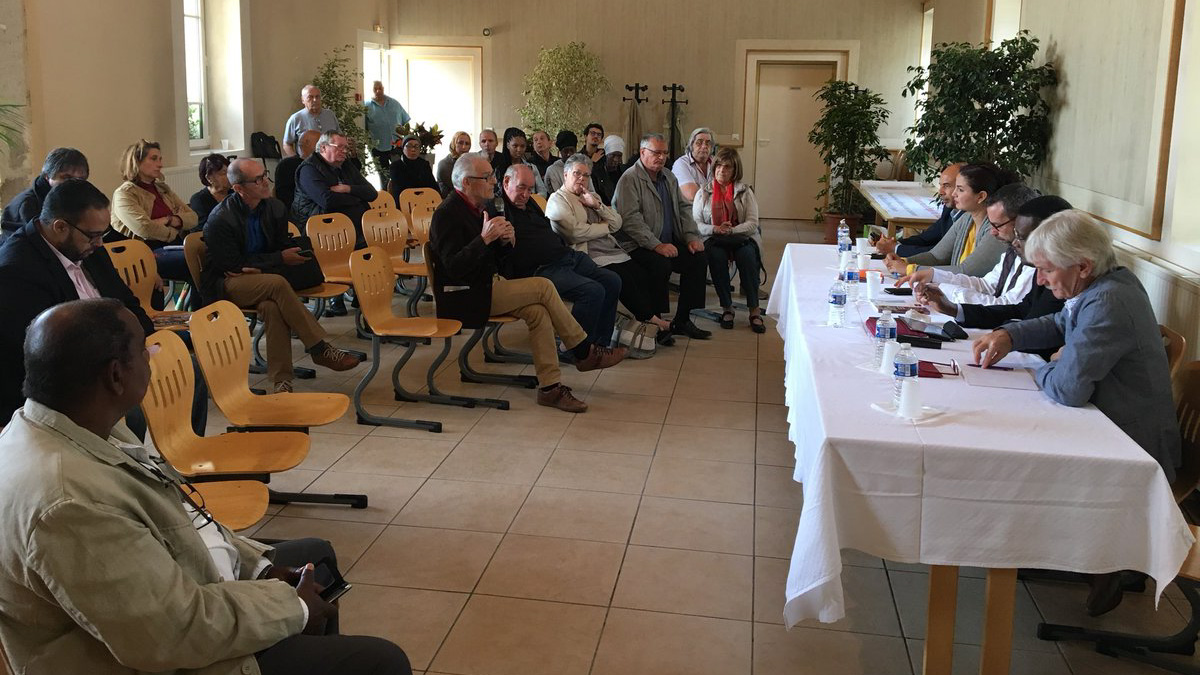