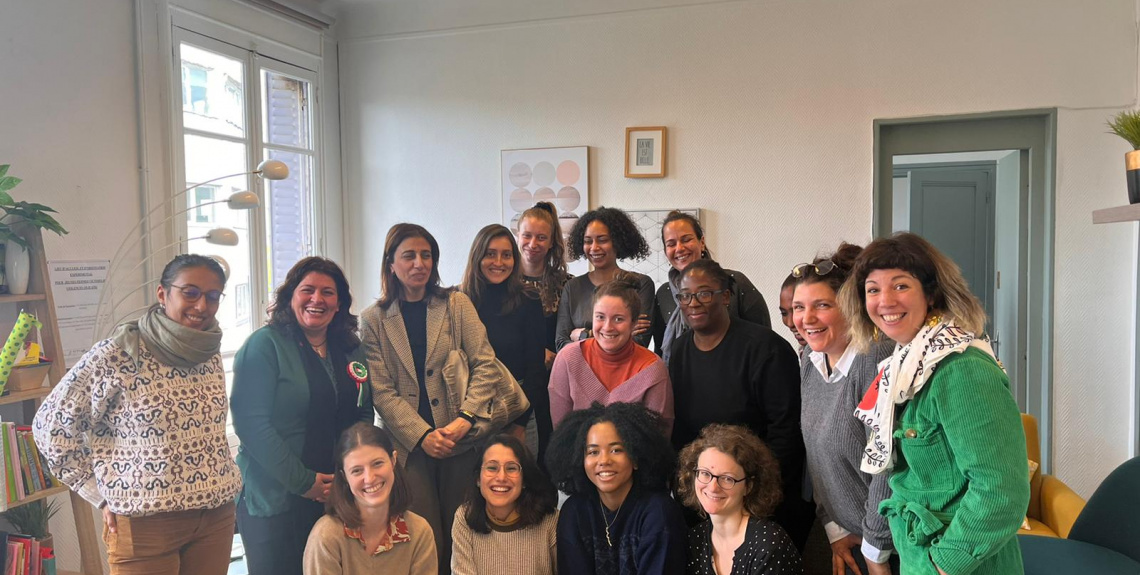 From 7 to 12 November, the CSIPDHR participated in the 18th edition of Femmes du Monde en Seine Saint Denis, a unique meeting held in the Department of Seine Saint Denis - Co-president of the Committee - gathering local governments, civil society, professionals and key partners to exchange on violence against women.

This year’s edition was very important as it marked the 20th anniversary of the Observatory on Violence against Women, a key institution - founded by Ms Ernestine Ronai, currently at its head - which has allowed to raise awareness, collect data and build statistics on violence against women at a local level in Seine Saint Denis. Through its ongoing and sustained work, the Observatory has opened several avenues for cooperation with actors of civil society, local associations and media, with the justice and healthcare systems; but also with the police and with educational and cultural stakeholders of the Department. Thanks to its great ability to build synergies and involve partners in this fight, the Observatory act as a catalyzer for the design and the implementation of local policies and tools to prevent violence against women; as well as to protect the victims and enhance their full empowerment through psychological and legal support, but also through housing and socio-economic reinsertion.

The first highlight of the week was represented by the celebration of the anniversary on 10 November, which gathered local representatives; all the partners of the Observatory (including the executive secretariat of the CSIPDHR); international delegations of Ngadzdija and Jenin; and national stakeholders from the justice system and from the Ministry on Gender Equality. During the opening remarks, Mr Stéphane Troussel, President of the Department of Seine Saint Denis, underscored how the work of the Observatory allowed local and regional governments to actively take part in the fight against gender-based violence and invited other cities and territories to follow the same pattern and build international cooperation and solidarity around this fight. Ms Isabelle Lonvis-Rome, the French Minister of Gender Equality, recalled the importance and the effectiveness of local tools and policies conceived by the Observatory such as the “Serious Danger Telephone” or the “Protocol for Femicide”, which were also adopted at national level.

Other partners discussed on the methodologies to assess violence against women locally and on the need for specific trainings to strengthen the capacity of different local stakeholders to ensure that women are protected as soon as they reveal to be victims of violence.  Participants also exchanged on prevention tools for youth; on the importance of art and theater for both prevention and recovery; and on specific measures for children, who are often “co-victims” of violence against women.

Another highlight of the week was represented by the presentation of the work undertaken by the pilot territories of Ngadzdija and Jenin throughout the first year of implementation of the international programme "Caring territories for women victims of violence", which consisted notably in a multistakeholder assessment of gender-based violence at local level. This complex exercise allowed the two territories to outline recommendations and areas of focus for the upcoming years and to raise awareness among the about the universal character of violence against women, regardless of different socio-political local contexts and legal frameworks.

Ngadzdija identified specific actions needed in terms of training, in particular towards caregivers; but also in relation to prevention to further raise awareness on sexual education and violence against women through school nurses and among the “cadi”, the local authorities in charge of marriages. Ngadzdija also outlined future actions and campaigns for protection and advocacy, notably to speed-up healthcare protocols for women and girls; to prevent early and forced marriage or to guarantee "therapeutic abortion” for victims of sexual violence.

Jenin drafted a detailed description the legal framework in the Palestinian Territories – especially considering civil law is not unified among the West Bank, the Gaza Strip and East Jerusalem - and underscored the challenges to enhance Women’s Rights in a conflict zone due to the Israeli occupation. The City also highlighted the key role of feminist movements in advancing women’s rights and undertook an accurate analysis on whether and how different forms of violence are recognized and institutionalized by local authorities, notably cyber-violence , economic and psychological violence or sexual violence, with a specific focus on rape, feminicide and “honour crimes”.

This intense and enriching week of Femme du Monde 2022 also included field visits with local actors working on different aspects of violence against women. Participants met the Pow'her day care center to assist young women aged 15-25 who are victims of gender-based and sexual violence; as well as the professionals working in the Specialized Psychotrauma Support Unit; which supports  female victims through specific methodologies to address mental health needs and ensure psychological follow-up. Lastly, the Collectif Féministe Contre le Viol shared its activities to listen and accompany rape victims to assess needs and the impact of violence, which also implies focusing on the “strategy of the aggressor”  to make different forms of violence visible since the beginning to avoid  their acceleration, accumulation and prevent their tragic consequences. All these local actors work in close cooperation with the Observatory of Seine Saint Denis – which contributes to collect and disseminate their data – and often their activities were established and consolidated under the impulse of the same Observatory, which generated a “spill-over effect” of good practices to protect women victims of violence in the whole Department.

The week also included meetings with associations of Seine Saint Denis; as well as a special meeting with the Mayor and the citizens of La Courneuve to raise awareness on Women’s Rights in Palestine.

The 18th edition of Femmes du Monde en Seine Saint Denis concluded with the meeting of the Steering Committee of the international programme – which was attended by Representatives of the Department of Seine Saint Denis, Ngadzdija and Jenin and the CSIPDHR – in which participants shared the results of the first year of the programme and exchanged on the 2023 agenda. The CSIPDHR shared the outcomes on the webinar on femicide and intimate partner violence;  news on the upcoming training Iztapalpa; as well as the great impact several actions of advocacy at the UN level undertaken in the framework of UCLG to open-up the debate on the role of local and regional governments in addressing violence against women in the international arena.