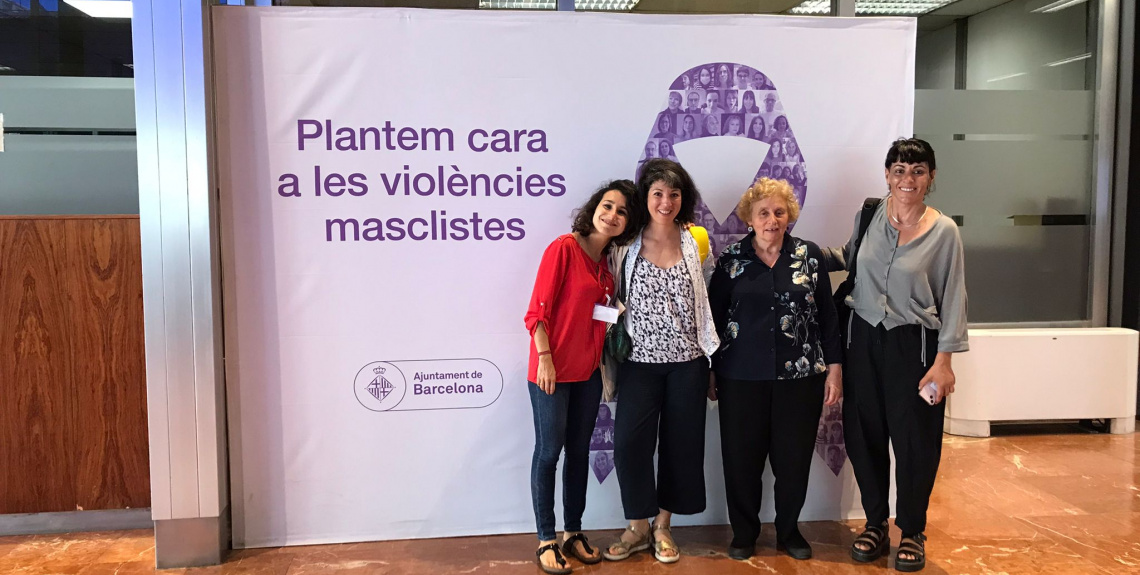 The UCLG-CSIPDHR, Ernestine Ronai (head) and Amélie Videau (coordinator) of the International Observatory on Violence against Women (OIVF) of Seine-Saint-Denis (France) met with the City Council of Barcelonaon for two-day visit to discover and exchange on local initiatives on violence against women.  The visit took place within the framework of the international programme: "Territories caring women victims of violence".

The first day of the visit aimed at discovering the services against gender-based violence of the City of Barcelona and the way they operate. The OIVF representatives visited the Servicio de Atención Recuperación y Acogida de las Violencias Machistas - SARA, the main gateway to public and private resources for emergency and long-term shelter for people experiencing gender-based violence. The two territories also exchanged information on Barcelona's specific tools and projects, such as the "Barcelona Circuit against Gender Violence", a system of networking, cooperation and collaboration between different actors in the fields of health, social work, police, justice and education to address prevention, detection, care, recovery and reparation of women and their children in a comprehensive, multidisciplinary and transversal manner.

The City´s employees also explained the methodologies developed in the city to assess the risk of violence and to detect the different phases of violence and activate the appropriate mechanisms for each of them (notably the security protocol, the reception device and the femicide protocol). Seine-Saint-Denis and Barcelona also discussed the importance of data on domestic violence and the specific treatment and follow-up of the victims from the emergency phase to their autonomy.

The discussions and exchanges between the two territories focused on the concept of "recuperación" adopted by Barcelona to offer victims of violence a comprehensive care based on different types of support and cooperation between the different actors, from their arrival at SARA to their social and economic empowerment.

In the afternoon of the same day, the OIVF and the Committee visited a women shelter as part of the “shelter system” for gender-based violence put in place by the City of Barcelona to observe the mechanisms of care and support for the recovery of the victims. The afternoon was devoted to a visit to Plural, a new "Centre for Masculinities" - part of the Servicio de Atención a Hombres para la Promoción de Relaciones no Violentas – SAH  aimed at the male population willing to engage towards more open, respectful and healthy relationship models. Eva Martínez Schiaffino, director of Plural, stressed the importance of the political legacy of other existing mechanisms in Barcelona - such as the Barcelona Circuit against Gender Violence - in catalysing men's commitment and behavioural change to rethink their models of masculinity as a means of preventing violence against women.

On the second day, OIVF representatives had a meeting with the UCLG- CSIPDHR to discuss the next steps of the international programme, and had a special visit to the City of Justice in Barcelona to attend a hearing on domestic violence.

On the same day, the Committee and the OIVF met with Eduard Corbella, adviser to "Feminisms and LGTBI" of the City and Maria Rangel, director of services of "Feminisms and LGTBI" to present the international programme of the Committee and the Seine - Saint-Denis "Territories caring women victims of violence".  This was also an opportunity to present the mechanisms of the Observatory of Seine-Saint-Denis (the protocol on feminicide and the measures of protection of victims for the exercise of parental rights); and to discuss how the networking and learning dynamics put in place by the international programme can contribute to strengthening the advocacy and the role of local governments to fight violence against women.