COVID-19 is fostering many interesting innovations in local government policy-making. The pandemic stressed rights guarantee as the best way to combat inequalities (both consolidated and emerging) while showing the effective capacity of local governments to contribute to this effort in the short and long term. The case of Rivas Vaciamadrid in Spain is particularly interesting in this respect, given the many issues addressed by the city during the emergency as well as the way in which it did so; cooperating for instance with civil society and other local governments. Its mayor, Pedro del Cura, shares in this interview several lessons learned by Rivas during the emergency, as well as his proposals for better advancing rights guarantee and social justice in the coming era.

According to Mayor Pedro del Cura, “the fact that in 48 hours we were able to transform municipal administration and the way our employees worked so that we made sure public service provision did not stop" was a great learning, which showed the commitment of our municipality as well as its administrative staff. This crisis has therefore reinforced the visibility of local governments, showing both their adaptability and their capacity to innovate face to crisis such as the COVID-19.

However, as the crisis also deepens inequalities and creates new vulnerable residents, local governments are encountering major challenges in trying to gather information on the living conditions of residents. Priority groups include people who suffered a sudden decrease in their income or older people living alone: “We need to have information on these groups’ living conditions and needs so that we don’t leave anyone behind and know what type of assistance should we offer as municipality”. Another paradigmatic example is that of domestic violence, where it is hard to combat submerged violence and social control by abusers.

Proof of this is the fact that with the de-escalation there has been an increase in the number of complaints filed for cases of domestic violence. In the case of Rivas Vaciamadrid, existing hotlines for victims have been reinforced during the crisis.

As COVID-19 is impacting inequalities, protecting the right to education should be key

Mayor del Cura highlights how, although there is still not enough data to measure the impact of the crisis on inequality, municipal social services are increasingly noticing a worsening of the conditions by many users, as well as more residents requiring support. Multi-level, coordinated social care and economic reactivation measures are needed to prevent poverty from growing or becoming structural.

According to the Mayor, one of the main priorities in this context should be to protect the right to education. With the closure of schools, “the right to education on equal terms as it stands in school disappears: even though we are focusing on guaranteeing rights provided on site in the school, such as security or food, many times these cannot be virtualized either”. The Mayor insists on education as an indicator of equity, as it provides equality of opportunity for residents despite the socio-economic conditions of families. To prevent the crisis from affecting this upward mobility mechanism, Rivas Vaciamadrid bought portable devices and worked with families to support them monitor the educational process of their children. According to the mayor “we have to reinforce the educational system in the long term to prevent school failure rates from skyrocketing and, hence, inequality rates”. 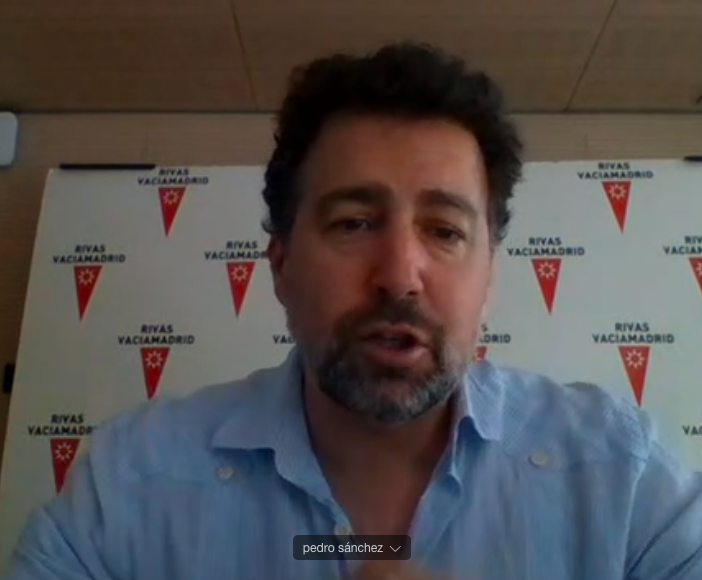 « Cities, beyond their differences, share the same responsibility to protect the rights of their residents. When facing the same crisis, municipalities dediced to share lessons learned and look together for promising solutions within our reach in spite of territorial differences, differing size or political affiliation. Local governments commitment and their willingness to cooperate is a very powerful message that citizens understand. We should claim this opportunity to promote more municipalism: local governments connection to citizens needs and aspirations and our key contribution to public administration »

“A strong investment in public services over the past year has helped us make sure that no new reality brought about by COVID-19 has gone unnoticed or we have had to improvise. Residents’ needs in areas such as transport, food shopping and psychological care have been met while maintaining open public attention via telephone". Indeed, the reinforcement of public services prior to the crisis has played a fundamental role in Rivas Vaciamadrid response, although not only. According to the mayor, “this system of social protection is not only the merit of the city council, but also of local civil society”, which has been particularly active in this field since the 2008 crisis. The former crisis triggered the creation of a local system of mutual support and solidarity, where numerous entities and neighborhood groups came to cover the shortfalls generated by severe cuts in public budgets for social care.

Not having dismantled this network allowed mobilized residents to make masks, support health centers, distribute food or provide transportation support. Other organizations have provided telematic and telephone support in areas such as education, or maintained online meetings for sport and culture group. According to the mayor, “these initiatives allowed us to break the adverse effects of isolation at the psychological level by maintaining social ties and continuing to live in a new form of normality”. This network of actors and residents also allowed the council to have better information and be able to reach realities that the council would not have been able to reach on its own: “Rivas is a big city that also has the best of a small town: we cooperate and lend ourselves to sharing needs and mutual aid".

“Having acquired valuable lessons in the fight against the pandemic, we now hope to create social antibodies that will protect us from the social and psychological toll it takes to go through a quarantine like that and the social effects of the economic crisis”. The mayor highlights how the crisis is not yet over, so public services and cooperation must be strengthened to cope with the new reality. At the same time, the crisis presents an opportunity to transform areas of local governance closely linked to rights guarantee and sustainability policies

Mayor del Cura notes how the promotion of healthy living habits will gain weight in the coming years as a public health paradigm. Local governments can continue to promote active ageing and the protection of the older population, the promotion of sport, new measures for psychological care or more balanced eating habits.

Another element that has been gaining weight is that of sustainable mobility. The mayor defends the need to “promote safe and accessible mobility models, which invite us to rethink the way our cities work”. Rivas tries to avoid an increase in the use of private vehicles and that the new normality does not involve using the car or staying at home only. Digitization is also a factor driving the transformation of municipal administration, although this push should not overlook the existing digital divide. In this sense, and only in the last few months, the council carried out a detailed telephone follow-up of the state of all the elderly people living in the municipality, gathering information about the people with whom they lived and what their needs were. 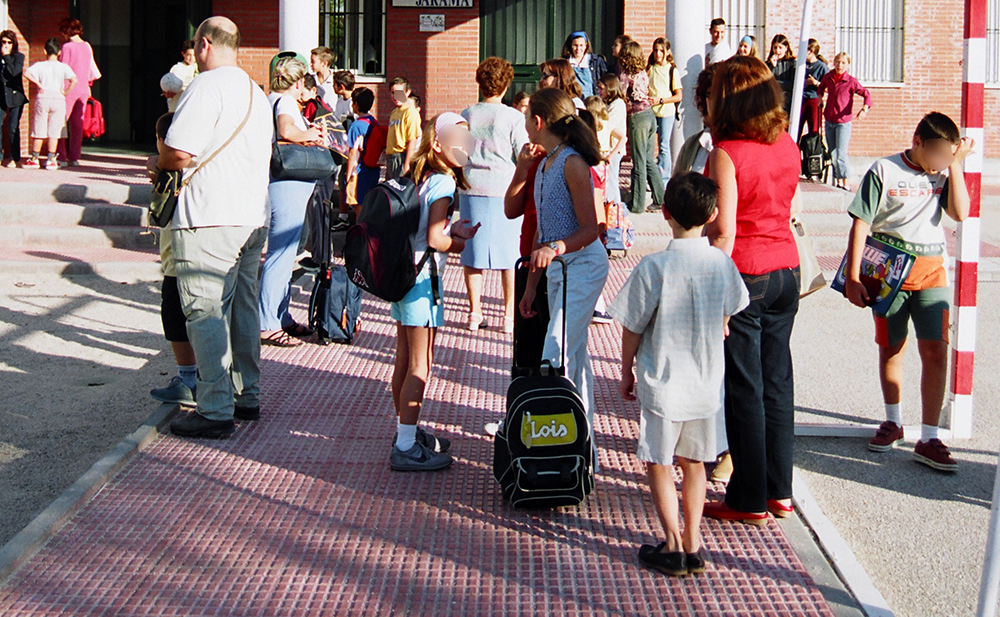 As for economic reconstruction, the mayor mentions how Rivas Vaciamadrid “is enabling citizen debate forums, which will not only propose ways to channel aid and lower taxes, but will also address aspects such as sustainable mobility or housing design”. The case of housing is of particular interest to the mayor, who mentions how “the concept of home has changed radically, and that not everyone has passed the confinement in the same conditions depending on the home they had”. To reconnect housing as a space for living, working and leisure, we must rethink the way we design not only homes but also public spaces.

The Mayor concludes by stating that “the best way to guarantee a daily life full of rights and the right to the city is to fight fear with responsibility: to regain the right to health to be able to have a daily life again” and that Rivas is entering to the new normality with an eye put on reactivating commerce and public spaces.

Cooperation between local governments is seen as a key element to overcome the crisis according to mayor del Cura, who highlights how “cities, beyond their differences, share the same responsibility to protect the rights of their residents". While local governments have often found themselves implementing national directives, they have also been generating their own responses from which much can be learned. “Today we have cities that are on the stage where I will be in a month, and others that have just entered the stage where I am coming from. It is important to support the flow of exchange and to highlight the solutions that work and those that don't, socializing failures as well in order to be able to learn”.

Rivas Vaciamadrid is an active city in the Spanish Federation of Municipalities and Provinces (FEMP), where it participates in a working group on sustainable mobility in relation to COVID-19. Del Cura notes how the crisis has strengthened cooperation between Spanish local governments in spite of territorial differences, differing size or political party affiliation. In facing the same challenge, “municipalities decided to share lessons learned and to look for promising solutions within our reach”. FEMP also offered a platform to demand more autonomy for local governments, “given that we are the gateway to many social needs of our citizens: if we are to be able to give them adequate answers, we need more resources”. Local governments’ commitment and their willingness to cooperate is also, according to del Cura, “a very powerful message that citizens understand”, so we should take this opportunity “to call for more municipalism: its connection to citizenship needs and aspirations and its contribution to the overall function of the whole public administration”.