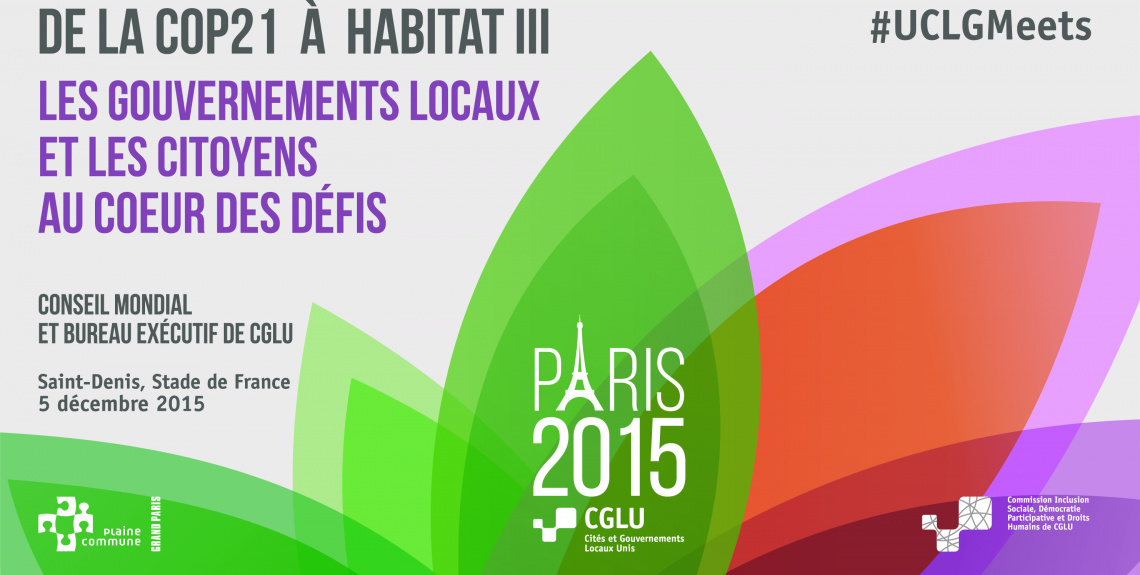 Right to the City and climate change: Committee's events during the COP21 & UCLG World Council

Within the framework of UCLG Paris World Council that will take place during the COP21, the Committee will organize three events -within the World Council, in the COP21 official space and in the Peoples’ Climate Summit- in order to consolidate the right to the city and the ecological transition agenda. These events will be held in Paris (COP21) and its periphery (Saint-Denis and Montreuil).

This open session of UCLG World Council, co-organized with Plaine Commune, with UCLG World Secretariat and the Global Platform for the Right to the City, will follow the work started in Porto Alegre Executive Bureau to articulate civil society and local governments - in views of the upcoming New Habitat Agenda (Quito, October 2016) definition process. Issues related to the ecological approach of the Right to the City will be at the center of this debate.

The event will be attended by Mayors from all over the world, among which those from Madrid, Barcelona, Pikine, Bogotá and Rosario, as well as civil society organizations, members of the Global Platform for the Right to the City, the Climate Action Coalition and local associations.

For the persons who are not registered at the World Council, registration is compulsory on this link. For participants of the World Council, the City of Paris will offer a bus in order to attend this session (to know the schedule, click here). For further detail on the seminar’s location, click here.

This debate, co-organized along with Habitat International Coalition –part of the Global Platform for the Right to the City– will be focused on right to the city’s potential contributions to ecological transition. We will also deal with the issue of articulation between different social movements (urban and ecological), and between them and local governments.

The meeting will be moderated by Gustave Massiah, with the participation of Dimitri Rossopoulos (Alternative Policies Institut of Montreal), Lorena Zarate (International Habitat Coalition), as well as representatives of the cityhalls of Madrid, Barcelona and Bogotá,.

For further information, please write to the Executive Secretary.

This event, co-organized along with Seine-Saint-Denis Departmental Council, will be based on two roundtable discussions on ecological transition as an opportunity to improve popular metropolitan peripheries quality of life, and on messages to elaborate in views of achieving resilient and inclusive peripheries towards 2050 horizon. It will be proposed alternatives based on the idea of ecological transition as an opportunity to achieve equitable, universal, just, sustainable and democratic distribution of resources, wealth, services and goods offered by cities.