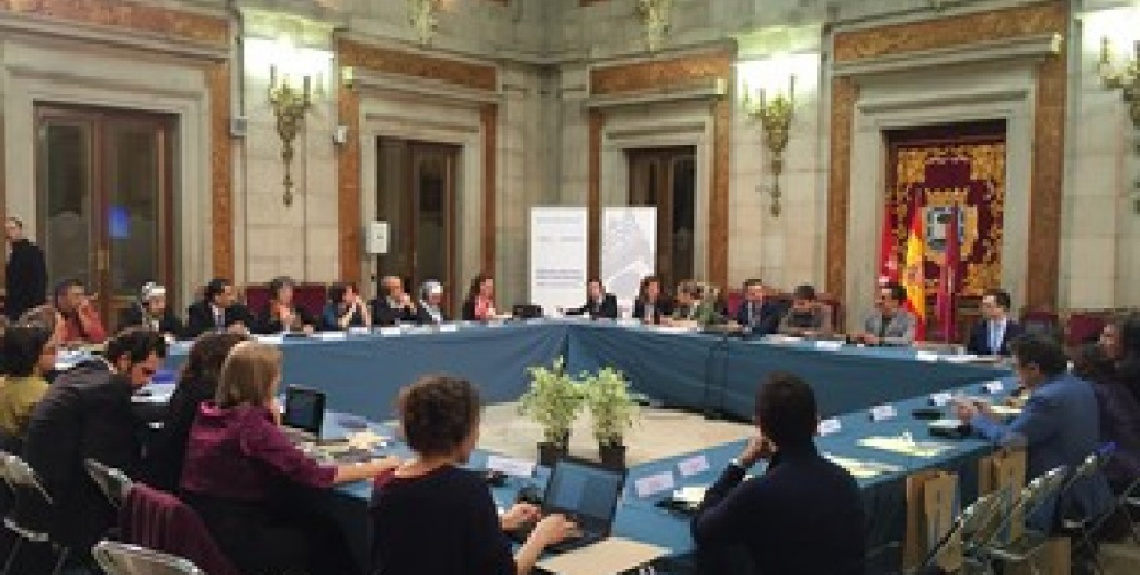 UCLG members involved in the Mediterranean City-to-City Migration project (MC2CM) gathered in Madrid to share their challenges, knowledge and solutions regarding labour issues for migrants and refugees at local level. This seconf peer-to-peer meeting of the MC2CM project focused on local governments' role in enhancing migrants' and refugees' opportunities in employment and entrepreneurship.

The cities of Amman, Beirut, Lisbon, Lyon, Madrid, Tangiers, Tunis and Vienna had two days of technical discussions together with representatives of UCLG’s Committee on Social Inclusion, UCLG’s Working Group on Migration and Co-development, the Swedish Association of Local and Regional Authorities and the International Labour Organization (ILO) in order to learn from each other about local authorities’ initiatives on the inclusion of migrants in labour activities.

The event highlighted several axes in which local governments have a role to play in labour issues, even if this is usually outside of their direct competences. In particular, participants recalled that city administrations are usually an important employer at city level, but are also a contract provider. As such, local authorities can include measures for the inclusion of migrants in the labour market in their own recruitment processes as well as through specific anti‑discrimination rules that can be included in their public procurement procedures.

Further, cities have an important role to play in the intermediation between unemployed people and local companies. That was in essence the example shown by the field visit offered by the Municipality of Madrid, in which participants could discover the strategy of the Madrid Agency for Employment , and how they work for the inclusion of the vulnerable groups (including migrants) in labour activities through several steps: an analysis of employment opportunities at local level, training, personal assessments and intermediation with employers to accompany the whole process. Participants had the opportunity to meet with 12 Monitors of Local Development working in Madrid city centre to improve social cohesion, environment and inter-culturality, showing the important power of job creation for sustainability in cities as well as for personal development.

These elements were emphasised in the ILO’s discourse, which stressed the role of cities in protecting the rights of workers, ensuring the right to join or create trade unions, and promoting anti-discrimination policies. Further, cities should be more involved in the harmonisation of labour and migration policies and have a major role in the local economy, identifying future sectors of economic growth and organising the human resources and training needed for this purpose.

In this regard, the Swedish experience, Fast Track, illustrated well how better coordination between the different institutions (national, regional and local), the private sector and social partners could enhance and reduce the time frame for the inclusion of newcomers in labour activities by identifying their own competences and the needs of the different sectors in order to offer adapted training (technical and language). Migrants usually lack resources in this regard and may somehow fall into the informal sector to cover their basic necessities.

The informal economy was raised as a main challenge for cities, as it usually leads to several kinds of conflict, in particular when it comes to street vendors: unfair trading (tax payers vs informal vendors), use of public spaces (squares, sidewalks, etc.), social and rights protection of the vendors, major illegality when products sold are counterfeit, etc. Various solutions were proposed by participants based on their own experiences, such as: propose and legalise sale points for irregular workers, help street vendors to organise cooperatives to better control the products they sell and formalise their activity, look to alternative job solutions (selective sorting in Beirut and Tunis is seen as an opportunity to deal with environmental issues and to create jobs for the most vulnerable groups), etc. The common point among all proposals was to ensure the legality of the activity and workers’ rights in this framework.

Thus, participants agreed on the important role that local governments could and should play in the inclusion of migrants in the labour market, even if city administrations do not have a direct mandate to deal with this. Indeed, as discussed in the Lisbon meeting employment is a basic step for both inclusion and social cohesion, and therefore local administrations should facilitate the inclusion of vulnerable groups, including migrants, into the labour market. All participants acknowledged that migration is a phenomenon that is being felt their cities and that it will increase exponentially in the coming years. Thus, sustainable management should help to include migrants as soon as they arrive, in order to better value their competences and to prevent exclusion.

Nevertheless, local governments should be supported by both the national level and international institutions in this task, in particular through the harmonisation of labour and migration legislations, the transfer of competences and the provision of financial and human capital to be able to protect migrants’ rights and ensure their inclusion.

The MC2CM project, which is funded by the European Commission, is led by ICMPD in partnership with UCLG and UN-Habitat. The project, which was launched in February 2015, will last for three years.

For further information on the project, please contact Lamine Abbad at the UCLG World Secretariat: l.abbad@uclg.org.