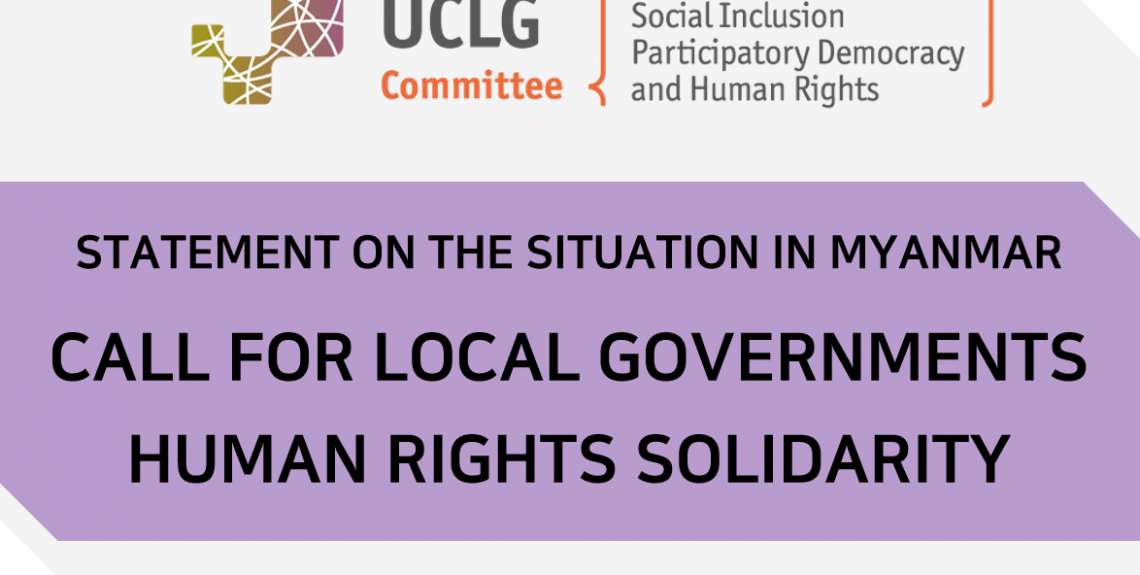 The following statement has been produced as a direct follow-up to the consultation on the Myanmar crisis held last April by Gwangju. This event was attended by the OHCHR’s High Commissioner Michelle Bachelet, the Barcelona Mayor and UCLG’s Special Envoy to the UN Ada Colau, and the UCLG Secretary General Emilia Sáiz. The UCLG-CSIPDHR co-presidency invites local and regional governments worldwide to join this statement which, beyond denouncing the human rights violations perpetrated by the military junta, also stresses the need to reinforce solidarity among local governments to protect human rights and democracy. This is particularly relevant in a time when these are under strain across the world.

Reach our Secretariat in case you are interested to join!

Statement on the situation in Myanmar

Representing worldwide local and regional governments committed to defend human rights in the framework of the UCLG Committee on Social Inclusion, Participatory Democracy and Human Rights, and following up on the reiterated call by UCLG for the rule of law and human rights to prevail in Myanmar, the co-presidency of Gwangju, Grigny and Barcelona strongly condemn the ongoing violations of human rights and express solidarity with the people and elected representatives of Myanmar facing repression, arrests and killings since the military takeover of February.

Despite major communication difficulties, local partners and NGO’s of our constituency emphasize how the people of Myanmar is experiencing traumatic situations. They are facing constant threats, violent attacks and the indiscriminate use of force by security forces and regime agents. This is causing a large displacement of people and severe human rights violations. We pay deep concern to the situation of journalists, human rights leaders and official figures, who are particularly at risk. We demand the liberation of democratic representatives who have been arrested by the regime, as well as the respect of fundamental rights of all citizens, especially regarding freedom of opinion and expression.

We also wish to bring to the attention the specific situation of urban poor and township areas, which are subject to targeted repression. For example, on March 14th, the military junta imposed martial law on six townships in Yangon, placing over 2 million people under the complete control of the local military commander and causing the displacement of thousands of residents. Also, children are no longer protected by international laws while arrests have been reported, ethnic groups are also suffering from specific violence like land confiscation and repression.

While national governments from across the world are taking sanctions that are particularly targeting the perpetrators of Myanmar’s coup , we, as leaders of local governments who are deeply committed to the defense of human rights values and democracy across the world, want to raise our voices and condemn the heinous acts perpetrated by the military junta in Myanmar. We also particularly want to pay special tribute to women protestors who are playing an active role to fight for democracy in Myanmar.

The leadership of the UCLG Committee on Social Inclusion, Participatory Democracy and Human Rights invites local and regional governments from all over the world to join this statement.

We demand the military junta to respect democratic values and human rights principles and call for concrete actions to be taken so that the spiral of violence be stopped and peace and democracy be restored immediately in Myanmar. On this occasion, we recall once more to the international community how local governments and their democratic representatives must be protected as frontline representatives of the needs of their communities and key actors for public service delivery.

In order to bring about this vision, we invite local and regional governments to adopt their own statements about the Myanmar situation, to support existing solidarity initiatives with the Myanmar people promoted within their own territories as well as through the work of NGOs in Myanmar, and to inquire their own national governments on what strategies are being implemented at an international level to restore the rule of law and democratic order in Myanmar.

Mayor Philippe Rio, City of Grigny (France) and co-chair of the UCLG-CSIPDHR

Mayor Ada Colau, City of Barcelona (Spain) and co-president of UCLG, Special Envoy to the UN

Linda Voortman, City of Utrecht (Netherlands) and co-chair of the UCLG-CSIPDHR