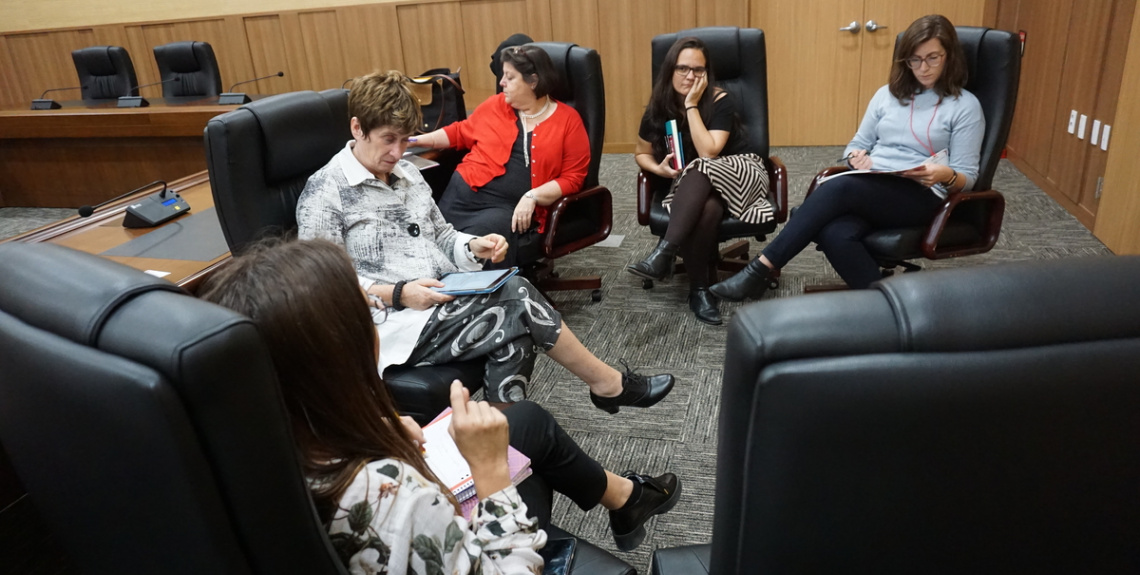 Several member-local government of our Committee were able to meet OHCHR’s Deputy High-Commissioner, Kate Gilmore, on the occasion of October’s Delegation to Gwangju’s World Human Rights Cities Forum. Meetings held in South Korea have provided a closer follow-up to the 2017 local government delegation to the Human Rights Council and the OHCHR. In perspective, deepening these conversations has allowed to showcase local governments action in the field of human rights, building upon strengthened relations between the Committee and the OHCHR.

Meeting with the Mayor of Seoul, Park Woon-son

The Committee organized a first meeting between Seoul’s Mayor, Park Woon-son, OHCHR’s Deputy-High Commissioner, Kate Gilmore, and the coordinator of OHCHR’s Asia Office, on October 17 at the headquarters of Seoul’s Metropolitan Government.

On this occasion, ways of cooperating were envisaged in order to advance the global movement of cities for human rights and to reinforce Seoul's commitments at the international level. This meeting was held in line with previous working meetings between the Committee’s Secretariat and Seoul’s International Relations, Human Rights and Housing Departments.

On this occasion, Mayor Park stressed how “the role of local government is becoming more and more important in dealing with a huge variety of emerging human rights issues”, equally noting how “this is a great moment to reaffirm our similarities in promoting human rights in people’s everyday life: that is why we encourage better human rights cities networking, more consultation meetings with local governments and to engage with already existing city organizations and other parties”. Mayor Park also recalled Seoul’s commitment in fighting gentrification and to promote the right to housing in line with its commitment towards the “Cities for Adequate Housing” Declaration. 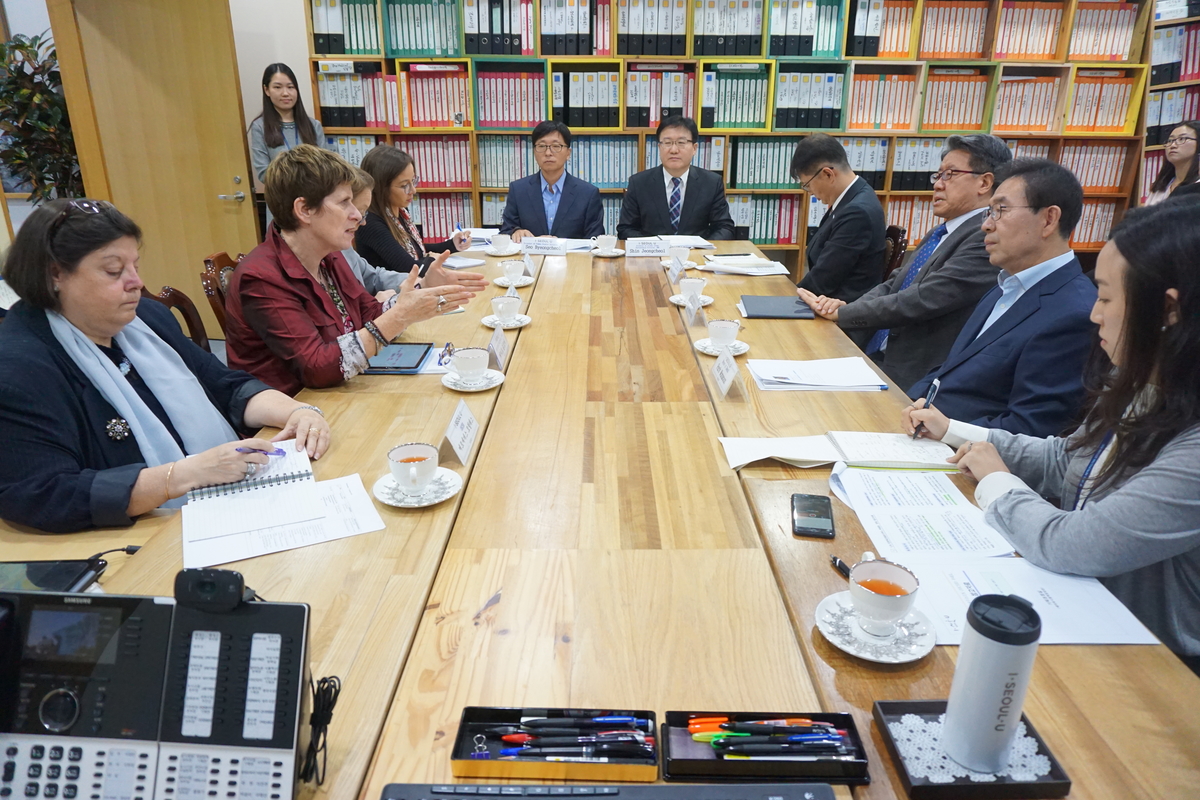 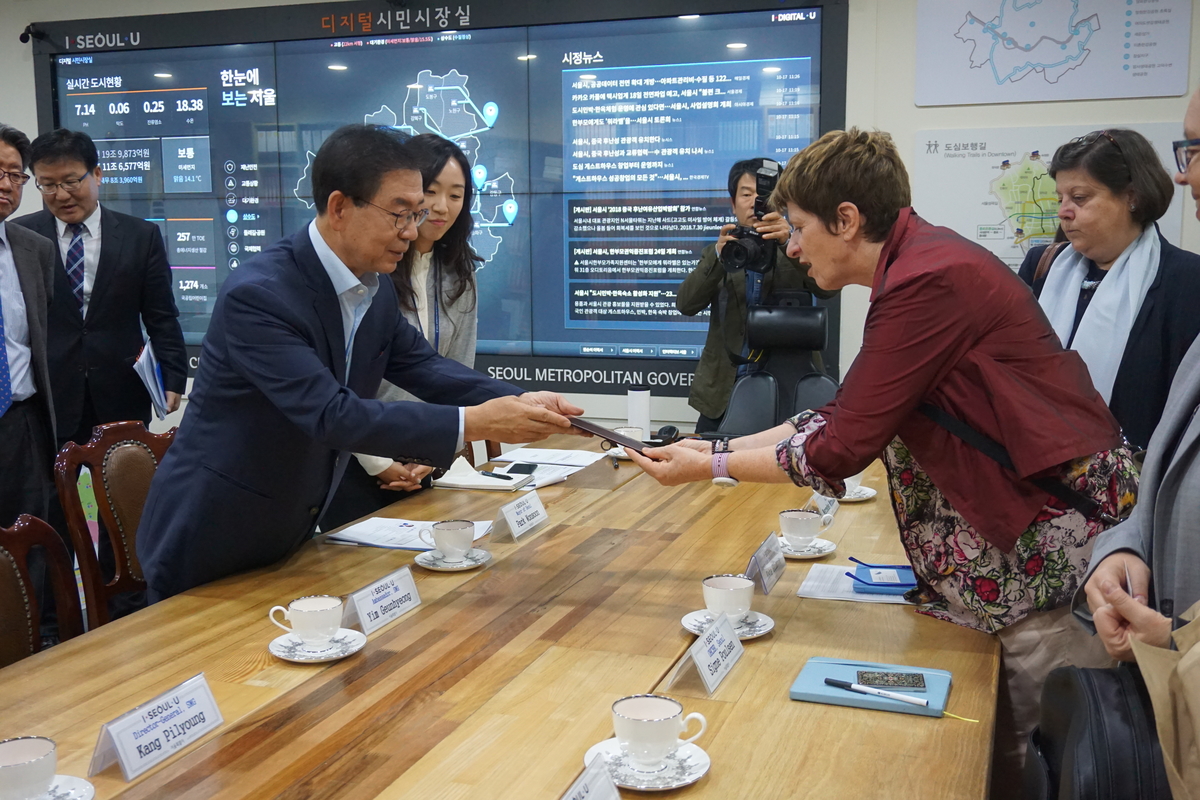 Deputy High Commissioner Gilmore thanked in exchange Mayor Park for Seoul’s involvement in the movement of cities for human rights. She noted how the hope of her Office is to “build on the existing initiatives of cities for human rights, seeing an enormous desire from city officials around the world to be identified in a more inclusive, tolerant and just process of organization”.

She noted how the fact that most people live now in cities poses great challenges, such as “new technologies protect human rights rather than take it away”, but believed that “the city is now the actor, the place where there is a dynamic possibility for positive change”. That’s why her office is “enthusiastic in finding ways of dialogue, championship and exchange with mayors and local authorities”.

Meeting with the Mayor of Gwangju, Lee Yong-seop, and participation in the 2018 WHRCF

The Deputy High-Commissioner travelled afterwards to Gwangju in order to take part in the 2018 edition of the World Human Rights Cities Forum. Ms. Gillmore was first received by the Mayor of Gwangju and co-chair of our Committee, Lee Yong-seop, to whom she thanked his city’s commitment for hosting an international human rights cities forum for the last 7 years.

On this occasion, Mayor Lee could inform the Deputy High-Commissioner of the city’s new human rights priorities, such as inclusive employment policies, protecting minorities or strengthening citizen participation.

Throughout the first day of the Forum, Ms. Gillmore supported and encouraged the human rights cities community to continue its work, inviting Mayors and local leaders from across the world to join the celebration of the 70 anniversary of the Universal Declaration of Human Rights as an opportunity to bring human rights home: in cities as scenarios of people’s everyday lives.

The Deputy High-Commissioner also shared with the audience the efforts made by the UN Special Rapporteur on Adequate Housing, UCLG and our Committee to bring together more than 30 global cities in the “Cities for Adequate Housing” Declaration and “The Shift” campaign: two interrelated initiatives that call on the international community to promote and protect the Right to Housing. 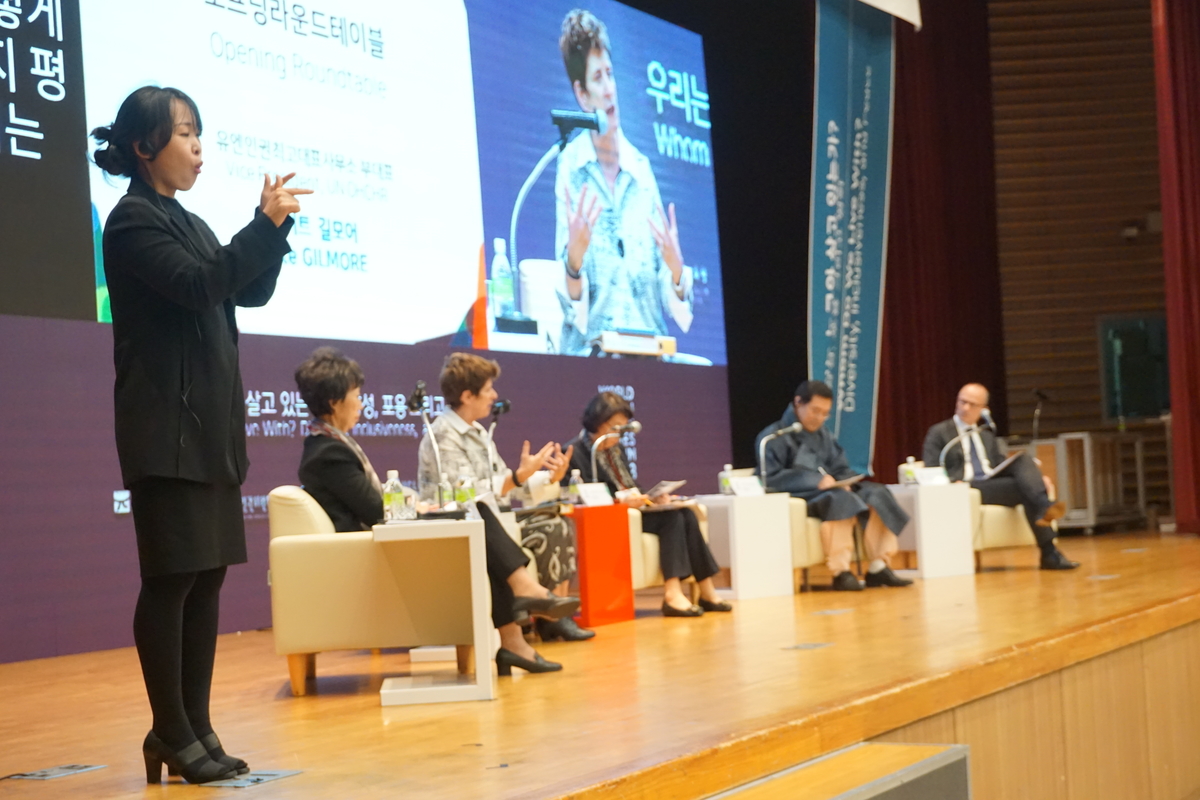 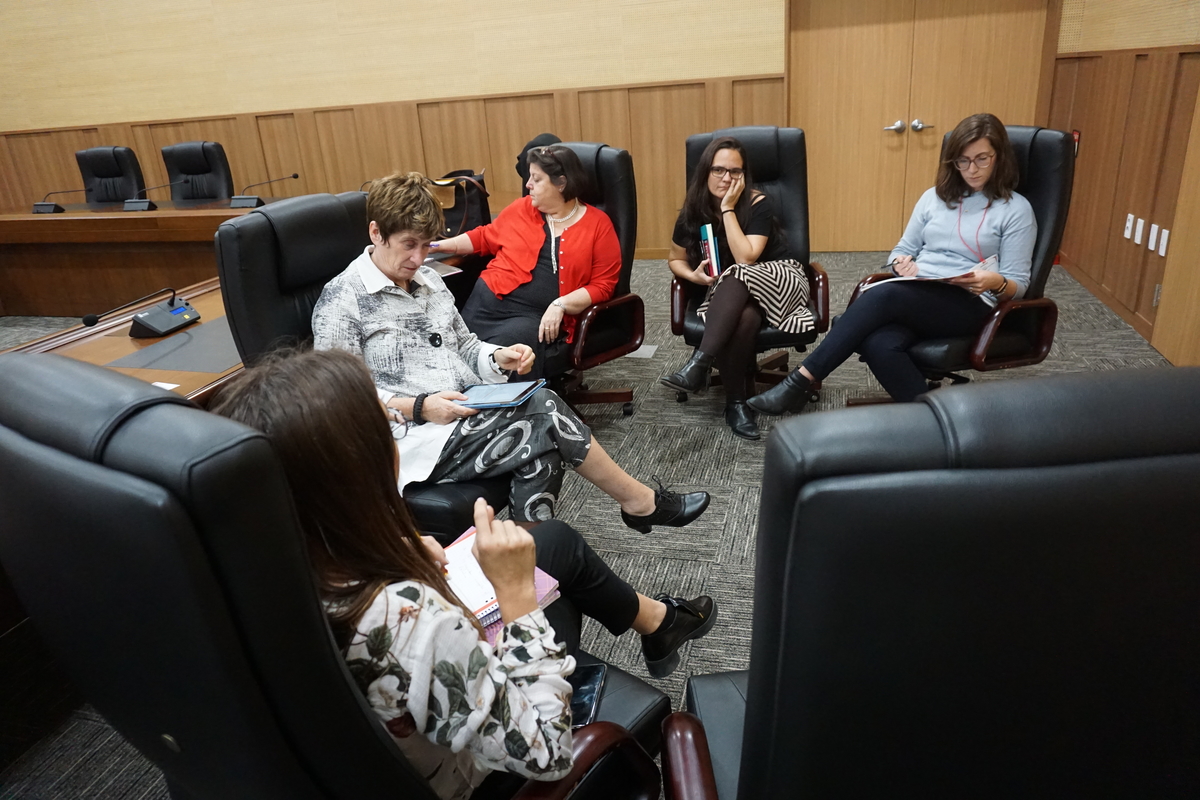 Meeting with members of the Committee

A working meeting celebrated in parallel to the WHRCF sessions allowed member-local governments from Barcelona and Sao Paulo to exchange points of view and priorities in regards to the way local governments and the OHCHR could engage in new partnerships and alliances that advance local governments role in human rights governance.

On this occasion, the Secretariat’s coordinator informed Ms. Gilmore of the work carried out by our Committee in the last years. The Committee gathers local governments that commit with human rights at a local, policy level, as well as at the international sphere. The Committee's coordinator equally briefed Deputy High-Commissioner Gilmore of the process developed around the Global Charter-Agenda for Human Rights in the City and the importance to deepen dialogue with local stakeholders that take part in human rights promotion.

On the other hand, the Directress of Barcelona’s Citizenship Rights and Diversity Department, Aida Guillén, shared with the Deputy High Commissioner some of the initiatives on human rights taken by the Catalan capital within the framework of the government’s measure “Barcelona, City of Rights”. The representative from the Migration Office of Sao Paulo, Andrea Zamur, shared in her case the actions led by her city in order to guarantee human rights universality in the field of migration and refuge. 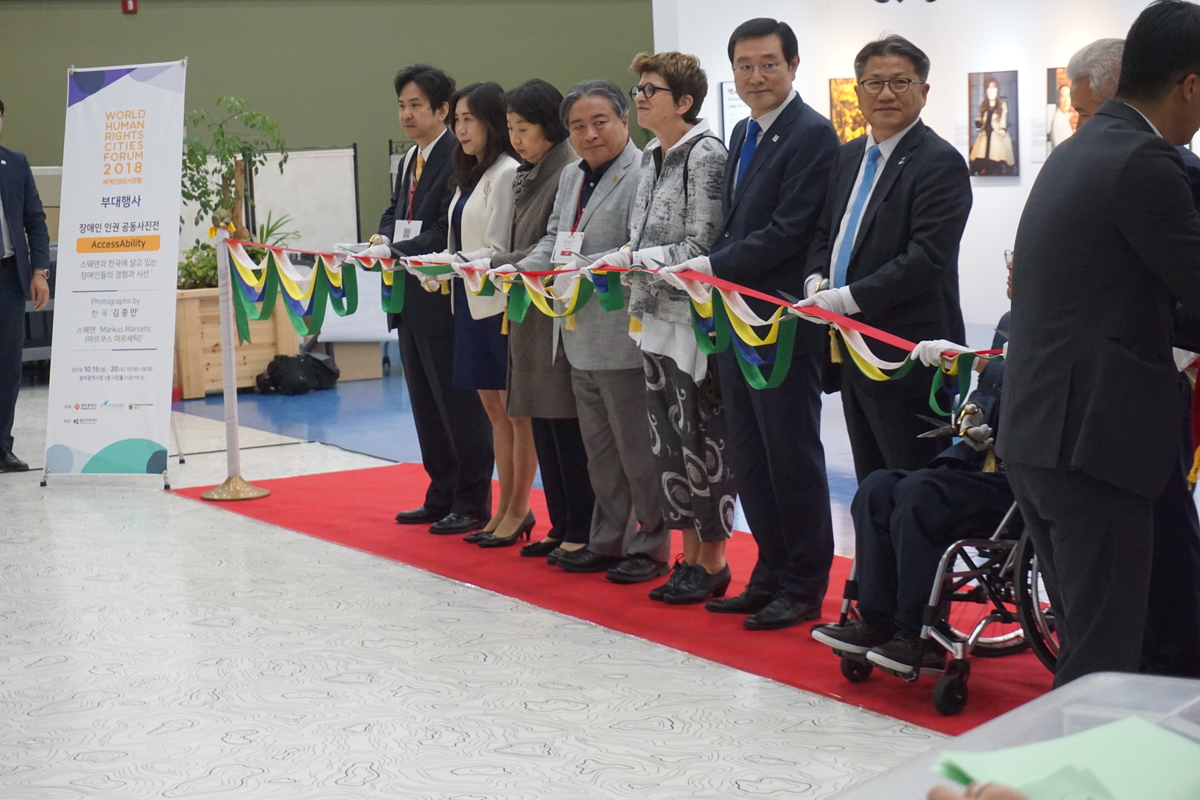 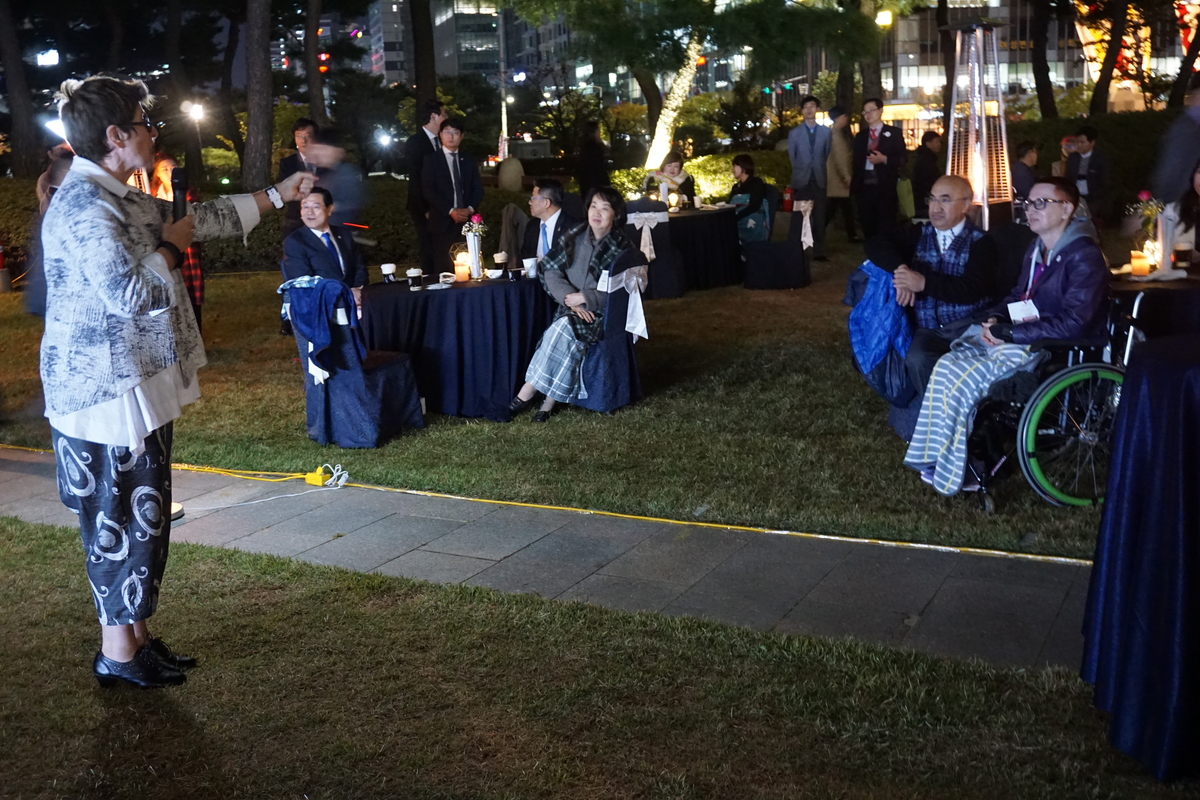