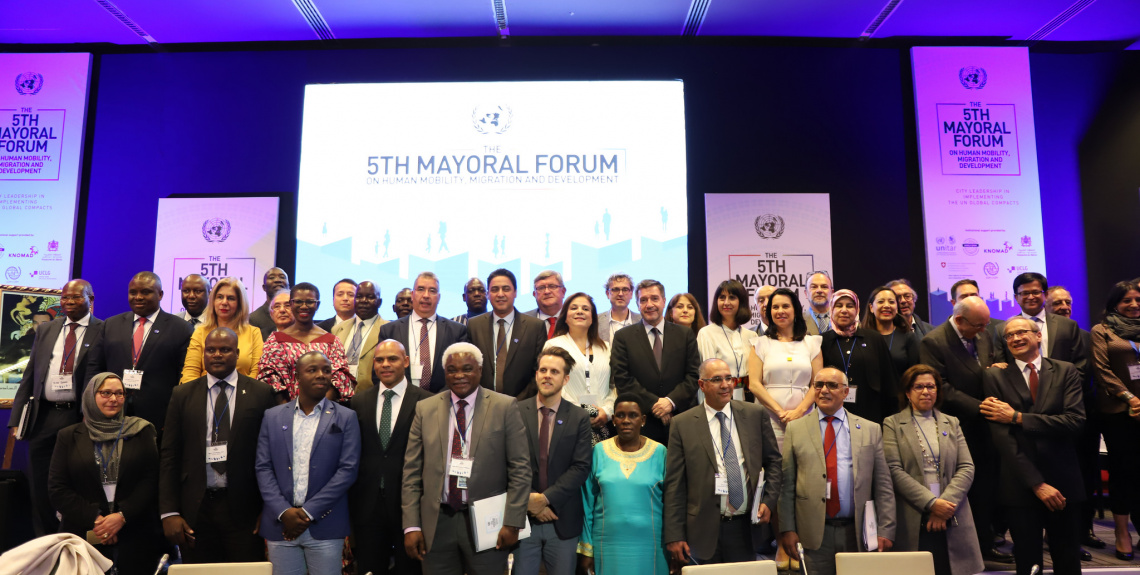 The Global Compact for safe, orderly and regular Migration was adopted in Marrakech on 10th December. The Global Compact is the first-ever negotiated global agreement on a common approach to international migration. On the eve of its adoption, on 8th December, local and regional governments worldwide gathered at the 5th Mayoral Forum on Human Mobility, Migration and Development to call on the international community to acknowledge their key role in the implementation of the Compact and how they play an essential part in migration governance.

Local and regional governments have a vital role to play in governing migration, since cities are the exit and entry points for migrants and the first respondents to their basic needs. With around 200 participants and representatives from over 70 cities, the 5th Mayoral Forum helped to raise the crucial voice of mayors in this agenda, in line with the support that UCLG provided in the negotiations of the Global Compact For Migration, advocating to include the local and regional governments’ approach in the development and implementation of this global agenda.

Local and regional governments should, in this sense, be fully taken into consideration and involved in the set of networks, mechanisms and tools that will accompany the implementation of the Global Compact, and should integrate, as well, the International Migration Review Forum.

As the closest level of government to the people, mayors also discussed their major role in changing the narrative on migration and the need for a human rights approach to migration policies. The situation and needs of communities’ at/on the border were also tackled calling for further resources to face these challenges.

During the Forum mayors adopted the Marrakech Mayoral Declaration “Cities Working Together for Migrants and Refugees” which calls for the full and formal recognition of the role of local authorities in the implementation, follow-up and review of the Global Compact For Migration and the Global Compact for Refugees.

The Declaration was presented during the Intergovernmental Conference to adopt the Global Compact for Migration by Valérie Plante, Mayor of Montreal, who highlighted that cities are in the frontline providing public services and ensuring the social inclusion of migrants in the host societies. “Cities and local governments are not only instances that react to migration flows and implement measures enacted by other levels of government. They are your partners,” she stated.

Side event: UCLG also participated in a side event organized by UN-Habitat to bring the local and regional governments’ approach to the discussions and showcase best practices of integrating migrants in cities. Partners, including the Centre for Mediterranean Integration (CMI), the Organization for Economic Cooperation and Development (OECD), and the United Nations Conference on Trade and Development (UNCTAD), agreed to strongly cooperate and coordinate their work around migration, with the aim to develop joint tools and conduct capacity building activities.

UN-Habitat is committed to implementing the Global Compact in partnership with member states and development actors to provide coherent and tailored support to national authorities, city leaders and communities for making cities inclusive and livable for all inhabitants

Announcement: During the closing ceremony of the 5th Mayoral Forum the Mayors Migration Council was announced. A new initiative promoted by the Open Society Foundation and the Swiss Government, this new program aims at empowering and enabling cities with knowledge, connections, and technical assistance on migration policies.

Speaking in the name of UCLG, Jean Pierre Elong Mbassi, Secretary General of UCLG Africa, welcomed this new initiative in which efforts and outcomes should converge through the Global Taskforce of Local and Regional Governments to reinforce the advocacy messages and efforts of the global constituency on migration.