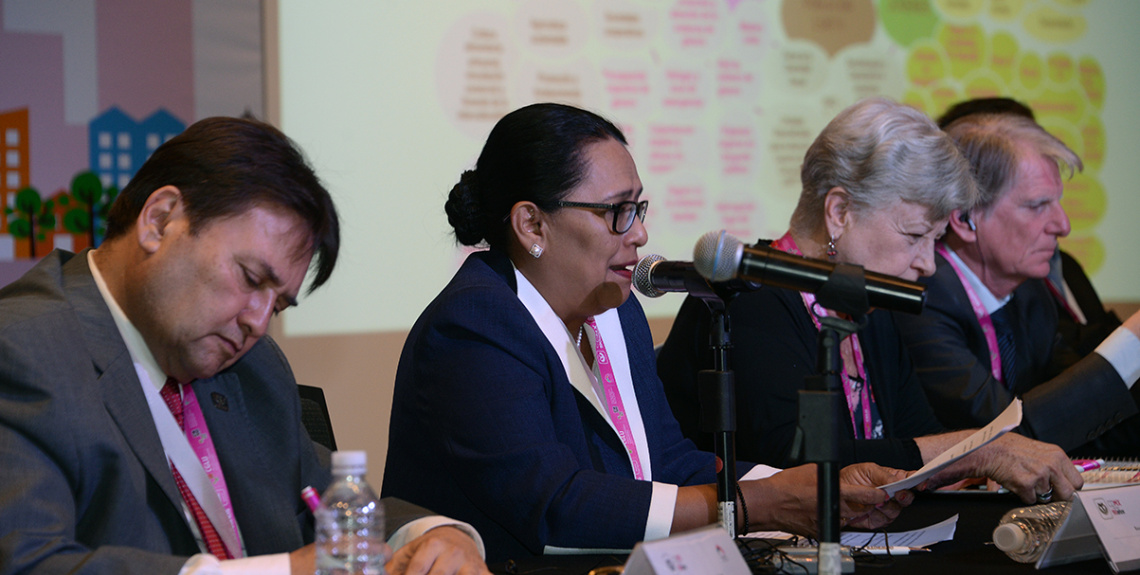 The International seminar of local governments for the Right to the City, co‑organized by the UCLG Committee on Social Inclusion, Participatory Democracy and Human Rights and Mexico City, took place from 20 to 22 April 2015. Over 4,500 of Mexico City’s citizens, city officials, students and representatives from district organizations also attended the seminar.
The seminar gathered 45 local and international speakers. Many representatives from local governments, civil society and the academic sector came together to share their experiences and reflections on how to implement the Right to the City and Human Rights in the City. Ten countries were represented, many of them from Latin America: Mexico, Colombia, Argentina, Brazil, and Ecuador; however, South Korea, South Africa, Senegal, Belgium and France also participated. Various representatives from district associations, NGOs and international organizations also took part.
The program was built around two plenary sessions and eight thematic forums that dealt with “the Right to the City, from local implementation to global advocacy”. All interventions aimed to define concrete proposals towards the New Global Urban Agenda, which will be an outcome of the next UN-Habitat Conference (Quito, 2016).
The experiences presented dealt with many issues, such as the full exercise of civil, political, economic, social, cultural and environmental rights in the city and tools for their implementation. Charters on the Right to the City were presented and discussed, particularly Mexico’s Charter for the Right to the City and the Global Charter-Agenda for Human Rights in the City. The themes of inclusive urban planning strategies, participatory democracy in its many forms, housing rights and social production habitat, access to public space, preservation of the environment and respect for minorities were also raised during the debate.
Further, the fact that the seminar had been organized by Mexico City’s Social Development Secretary, Ms. Rosa Icela Rodríguez Velázquez, along with the Department of Social Development, the Under-Secretary for Citizen Participation and the city’s international affairs service, enabled it to be strongly rooted in the local community. Indeed, based on its work within the districts and its links with popular movements, the Department of Social Development of Mexico City was able to successfully mobilize its resources. A visit to a district improvement project in the Tepito district was successfully organized. International speakers also had the opportunity to participate in a public event on basic universal income for elderly people, which gathered five thousand people. These two actions demonstrated the important work of Mexico City for the Right to the City.
The final declaration adopted at the end of the seminar reaffirms the importance of the Right to the City in a mostly urban world where inequalities are threatening common good living. This declaration describes the Right to the City as eight major commitments, providing a step forward for its implementation and targeting key objectives. The declaration also calls to increase networking by local governments with relation to the Right to the City and to build alliances with civil society, particularly within the Global Platform for the Right to the City, in order to influence the New Global Urban Agenda. Furthermore, UN-Habitat is asked to guarantee the effective participation of local governments and their associations in collaboration with civil society in the preparation, organization, and implementation of the Habitat III Conference.
Overall, the seminar advocated for the Right to the City and Human Rights in the City in local practices and in the international agenda. In order to follow up on this work, future meetings are planned: the 5th World Human Rights Cities Forum of Gwangju from 15 to 18 May 2015 and the “Cities dialogue” meeting organized by the city of Bogotá from 3 to 6 June. A thematic meeting on this issue will also take place during the UCLG Executive Bureau, which will be held from 10 to 12 June in Porto Alegre (Brazil).
Finally, the first 2015 biannual meeting of the Committee on Social Inclusion, Participatory Democracy and Human Rights was also held during the Seminar. This meeting allowed the Committee to present their work for new members, to approve the 2015 Action Plan and to name a new Collective Presidency. The Mayor of Gwangju, South Korea, Mr. YOON Jang‑hyun, the Head of Government of Mexico City, Mr. Miguel Angel Mancera Espinosa, and Mr. Abdel Sadi, Co-President of the Seine-Saint Denis Council in charge of international relations, demonstrated their interest in taking part in the Co-Presidency of the Committee. Patrick Braouezec, President of the Urban Community of Plaine Commune, should also be maintained as a Co-President, with a coordination role, in collaboration with the Technical Executive Secretariat. We hope that Executive Bureau of Porto Alegre will ratify this new composition of the Collegiate Presidency.