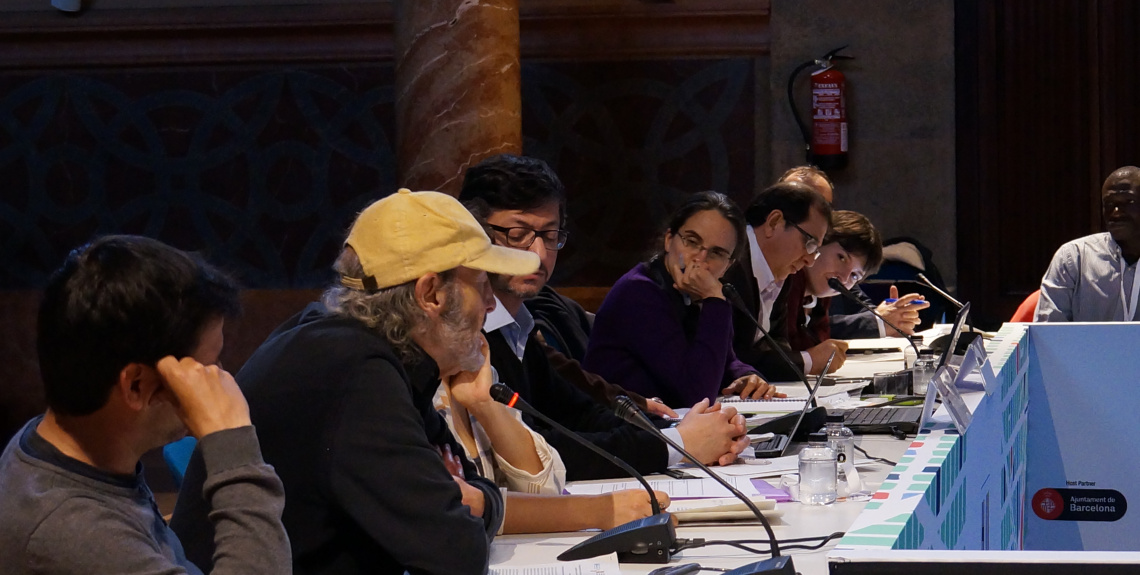 Last 5th April, as part of the Habitat III Thematic Meeting on Public Spaces in Barcelona, it took place the side event on “Homeless people’s rights: what place in the New Habitat Agenda?”, which highlighted the need for including this collective’s rights in the agenda to be defined in Habitat III. To this end, the Declaration Recommendations on Homeless People’s Rights. Homelessness in the New Habitat Agenda was adopted. This roundtable was organized by the UCLG Committee on Social Inclusion, Participatory Democracy and Human Rights, along with the Habitat International Coalition (HIC), the Global Platform for the Right to the City, the Office of the UN High Commissioner for Human Rights and the Global Taskforce of Local and Regional Governments.

Moderated by the Committee’s Coordinator, Magali Fricaudet, the debate was divided into three different parts: the first one focused on homeless people’s situation in cities at global and local level. Miquel Fuster opened this panel with his testimony as former homeless person: “The experience of living in the street marks you for life, but there are organizations that accompany you throughout the recovery process. It is actually two processes: the reparation of the self and the abandon of resentment towards society”. For his part, Ibrahuma Seydi contributed with his experience with migrants’ precarious housing conditions in Barcelona and highlighted the need for local governments committed to Human Rights in order to prevent abuses of the most vulnerable collectives.

María José Aldanas focused on the breach of the right to housing as a fundamental cause of homelessness, and stressed the importance of the UN rapporteur on adequate housing (Leilani Farha) last report, which focuses on homeless people’s situation and rights. Bahram Ghazi, for its part, outlined the insufficient attention that is paid to the issue of homeless people’s right in the international arena and proposed to create a global network of organizations working for the guarantee of such rights. Finally, Giovanni Allegretti explained the work carried out under the Bogota Humana programme regarding homeless people –especially the introduction of a rights-guarantee mainstreaming in District Government’s public action, as well as a change in the way this phenomenon is approached.

The second part of this debate was devoted to exploring and assessing public policies that effectively guarantee homeless people’s rights from an integral perspective and emphasizing residential exclusion’s role in this phenomenon. In this regard, Laia Ortiz stressed the need for co-producing public policies along with homeless people and organizations that accompany them, and for focusing in homelessness prevention, the guarantee of rights (not only right to housing, but all of them) and meeting their basic needs outside economic and financial markets. Also from a local administration perspective, Jorge Enrique Rojas highlighted the need for recognizing the diversity of homeless people and for translating these differences into adequate public policies. Jesús Ruiz emphasized the importance of civil society organizations’ role in homeless people empowerment, and mentioned two specific functions: the accompaniment of these people all throughout their recovery process, and a political advocacy task to promote and monitor public policies that respond to homeless people’s real needs.

Finally, Patrick Braouezec and Lorena Zarate concluded the event presenting the challenges that the New Urban Agenda will have to face regarding this issue and making recommendations in order to get homeless people’s rights included in it. Lorena Zarate insisted in the fact that it is a political problem –only in Europe, there are more than 4 million homeless people, whereas there are 11 million empty houses. Zarate proposed to work for the security of tenancy to be independent of its legal form –which would enable to guarantee human rights without making its compliance depending of ownership rights. Finally, Patrick Braouezec highlighted the fact that, faced to States’ inability to guarantee their inhabitants’ human rights, solidarity among people and working in networks do work. “In Habitat III we need to get States and local governments committed to the guarantee of homeless people’s rights and to reaffirm that their criminalization is unacceptable”.

The whole set of recommendations are in the Declaration, as well as a report of the debate. You can access to the event’s photo album by clicking on this link.