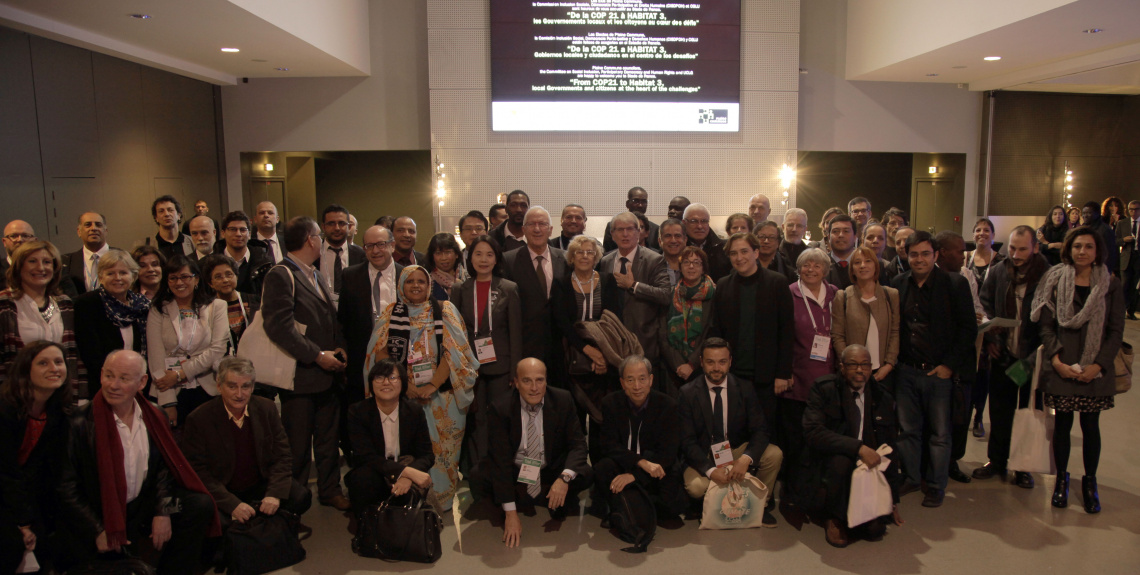 From COP21 to Habitat III: Ecological transition and the Right to the City. Minutes of the Committee’s activities during COP21 and the UCLG World Council (December 2015)

From 4 to 10 December 2015, the Committee on Social Inclusion, Participatory Democracy and Human Rights was in Paris and its surrounding areas (Seine‑Saint‑Denis) to participate in the UCLG World Council and COP21. These activities and meetings with local governments and social movements enabled the Committee to strengthen its messages and alliances for fair, democratic and sustainable territories.En este artículo encontrará los enlaces a los vídeos y las actas de las sesiones organizadas:

In this article, you will find links to videos and minutes from the sessions organized by the Committee:

1. “From COP21 to Habitat III: local governments and citizens at the heart of the challenges” (Seine-Saint-Denis, 5th December): open session within the framework of the UCLG World Council. More than 200 local government representatives, citizens and academics expressed clear messages: the fight against climate change involves social justice; we need to rethink the way we are building and developing territories in order to achieve full ecological, democratic and social sustainability.

2. “Ecological Transition and the Right to the City” (Montreuil, 5th December): the Committee, in partnership with Habitat International Coalition, brought the topic of the Right to the City to the People’s Climate Summit agenda through an open debate that gathered local citizens, social movements, academics and local elected officials. The alliance between local governments and civil society was highlighted as an essential element to limit the climatic consequences of the growing urbanization seen across the world. The Right to the City, through the sharing of urban resources and as long as it is oriented to ensure common “good living” (Buen Vivir) in cities, enables a new paradigm towards sustainable urbanization based on solidarity to be envisioned.

3. “Ecological transition in popular peripheries: a priority to reduce inequalities” (Le Bourget, 8th December): at the initiative of the Seine‑Saint‑Denis Departmental Council, the COP21 Official Area hosted a side event on peripheral popular territories’ vulnerability to climate change and the opportunities offered by ecological transition in terms of social inclusion.

4. “From COP21 to Habitat III: Cities and Citizens’ networks committed to global challenges” (Paris, 10th December): Fondation pour le Progrès de l’Homme [Foundation for the Progress of Humankind] organized a conversation between European and American foundations working for sustainable cities and local government networks. The need to work together in order to build fair and sustainable cities based on solidarity – especially in view of the Habitat III Conference – was raised during this session.

Towards common perspectives for action at local level

The activities carried out during COP21 and the UCLG World Council enabled the consolidation of the global movement for the Right to the City and to reinforce the network that works towards its concrete implementation as a necessary approach for fair, democratic and sustainable territories. In addition, all these activities confirmed that a movement of local government that, along with civil society, is determined to act for climate and social justice does exist. This movement intends to contribute, through its messages, to the New Habitat Agenda that will be defined in Quito (17-20 October) and, beyond this, to frame the Right to the City as vital to ensuring the sustainable urbanization of our planet.